The New York Times has an interactive map showing income changes from 2000 to 2010 based on the Census Bureau's American Community Survey (I think this is the one that Stu was asked to participate in and refused). The map shows the change in median family income since 2000...tan is going up, blue is going down. Here is what it looks like around Racine (and based on the map, I can already imagine some of the comments!) 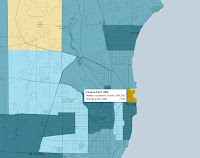 The interactive version allows you to look anywhere in the country. If you hover over any spot on the map, it tells you the median household income and the percent change. Remember, the median is different from the average. The median means that half the households make more and half make less which is regarded as a better indicator of income levels as it is not skewed by a few high income earners (after all, between me you and Bill Gates our average net worth is about $20 billion).

I of course was curious about where I used to live and where I live now. Both places I was a touch over the median household income. I know I have an advantage over most since my household size is smaller (one). If I was married and had a kid or two with my current income, my lifestyle would be a lot different and I know that is reality for a lot of people. I find it particulalry interesting to look at some of the nice areas near the U of A where I run. The median income is much lower than I would have thought based on the several hundred thousand dollar homes. Again, I have to remember there are lots of student apartments the keep the median down.

Anyway, it's an interesting map to click around. Enjoy!

UPDATE: I just went to the small town in Iowa where I grew up...no data! Interesting.
Posted by hale-bopp at 3:12 PM

I'm always surprised at how much home people buy into. It would make me way too nervous to walk that line. I'd much rather live below what "they" say I can afford and not have to worry about the wolf at my door.

The neighborhood that my parents live has been hit very hard. But that is obvious when I go back and look. I still love the area and think it's great, but you do see a decline in the houses.

Woo-hoo! I live near some richy riches downtown.

Yep, I noticed that little island downtown that was doing pretty good, Orbs. I know there have been some new condo projects built there and wonder how much a few hundred higher income people moving there could skew that.

That's a different map, Huck, but sure would be interesting to compare the two.