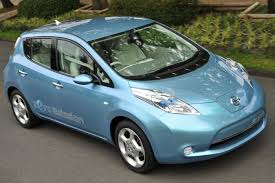 Yesterday at the Tucson 4th Avenue Art Fair, Nissan set up a booth where you could test drive a Nissan Leaf. The Leaf is the new all electric vehicle that you is about to go on sale. Being a bit of a tech geek, I took them up on their offer of a free test drive. Tucson is one of the first markets to get the Leaf and there are public charging stations already being built (and a few already operating) here. The GPS system will show you a map that plots the range of the car based on the current battery state.

They give you a short presentation about the car beforehand of course. They show the battery pack and some of the tech tools on the car that help you plot your driving route to be sure you don't run out of juice along the way. It's a very tech heavy car both under the hood and in the cockpit. You can start the AC or heater (whichever is needed) from your cell phone (the idea being that you do the initial cool down/warm up while the vehicle is still attached to a power outlet so you don't drain the battery for that). You can set the car to charge at certain times of the day or even send you a message if you forget to plug it in at night. I know they can't overcome all human forgetfullness, but they sure try.

The car is very comfortable on the inside. The version I drove is considered pre-production (one change they said had to be made is to add noise so pedestrians can hear it coming...you probably heard about this issue). I intentionally went a little heavy on the accelerator and it had passable pickup, but not sports car level! It has an eco mode to improve range. They turned it on for a little while and I could tell the acceleration was limited and it had a different feel. Operating in standard mode, the handling was nice and smooth.

Charging is tricky...it can take 20 hours to get a full charge from 120V but only 8 if you have a 220V plug installed at your house. The quick charging stations give you and 80% charge in 30 minutes. Will do in a pinch, but if I am driving long distance across the country, I don't want to make that many half hour stops!

And it's pricey. Starting at $32k (more if you want the upgrades that include the quick charger) plus tax, title, etc. and you have to get the 220V charger at home if you want to use that. They make a big deal out of the tax credits of course ($7500 federal) but that might get it down to comparable to a similarly sized vehicle at best. They keep saying the price will come down in the future as battery production ramps up and economies of scale are realized (but even getting them to speculate how much is difficult...yeah, I am real fun to take on a test drive!)

I can't see this being the only car for a single person like me. Even a day trip to Phoenix would kill it and I would need to charge it somewhere (okay, probably two somewheres). For a two car family, it could be the second if one of the couple worked locally and they didn't both have to travel long distances for their jobs at the same time (this scenario probably applies to quite a few families...and it might be a good way to keep your teen from driving farther than they should!) Even at that, the price might make a compact car or a used car more appealing to many people.

As nice as it is, electric vehicles are still not an option for everybody. Many of you know I got a new car recently...I went with the Honda Fit and don't plan on trading it for an electric vehicle any time soon.
Posted by hale-bopp at 9:47 AM

I've been very happy with my Honda. The Fit seems kind of small. I like a little more metal around me with the crazy drivers out there.

You didn't address battery life and cost of replacement. Going to be real fun trying to unload a car that needs a $8,000 battery every 4-5 years. What are the safeties in case of an accident that destructively depletes the battery charge?

Battery life: the battery has an 8 year/100,000 mile warranty (and I expect that due to battery range, these vehicles will be drive fewer miles annually than gas powered vehicles). They expect at that time the batteries will hold 80% of the charge they did when they were new. Nissan will take trade ins of all old batteries and reuse/recycle them. They didn't make any comment on the price of replacements which could be hard to project eight years out (and I don't buy they will be cheaper with 100% certainty...if they car bombs or a different form factor becomes dominant, these could be expensive custom jobs just as easily as the price could fall).

The person giving the presentation mentioned there were safeties to keep the battery from exploding. I pressed her a little bit on how it worked and it was clear that she just knew a buzzword or two from marketing and trying to figure out exactly what they did from her would be banging my head against a wall.

As for overall cost of ownership, stretch out the battery life to the projected 8 years, figure out miles driven, fuel saved, amount spend on electricity over the time and reduced maintenance costs (the maintenance schedule looks like less than that of an internal combustion engine) and well, I don't have a firm answer on that one. Could depend on driving patterns and even what part of the country you live in as the effects fuel prices, electricity prices and battery performance (they say it won't matter, but I wouldn't be surprised if batteries have different performance characteristics in different climates!) From a personal finance standpoint, paying thousands for a new battery can be hard to stomach no matter how many times you try to comfort yourself with how much you saved over the years. There is a psychological component as well.

Sorry I can't answer everything, Huck...only had a short time with the vehicle and I was not exactly dealing with the engineers! Still had a good time doing it though.

Hale, you fit into that little tin-can??? I'm amazed! Aren't you a little tall for it???

A question I have is about the charging stations...what fee do they charge to charge your vehicle? Is it by the hour or what?

I hadn't heard about the issue of a vehicle being too quiet for pedestrians, but it makes sense. I believe that both driving and pedestrian skills are down.

I know nothing about electric cars or hybrids, but I'm glad to see them around. I don't see USA drivers giving up cars, just changing fuel sources, which will drive a huge market and aftermarket.

Oh, I forgot to answer your question, Beejay. There are two different types of charging stations. The standard (220V ones) are going to be free (at least initially...there are no payment options on the first generation equipment so they would have to upgrade to charge) but these take 8 hours to fully charge so you would not be able to get a full charge while seeing a move or something. The rapid charging stations (the ones that give an 80% charge in 30 minutes) will have a fee that would be set by the owner, which they estimate to be $3-$6 but could vary by station.