I Took the Plunge – No TV 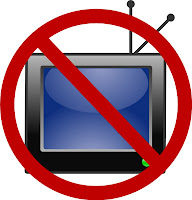 Well, it’s more like I was pushed over the edge by economics. I couldn’t afford my Time Warner Cable bill anymore. I will cut back on food before I will give up Road Runner Turbo, so something had to give. Dropping television halved my bill. I might have been able to afford RR and the Basic Tier of TV service, which essentially are the broadcast channels, but I haven’t watched them in years. (Except, I’ve watched channel 19 for some oldies - I’ll miss The Untouchables.) On the cable channels, I mostly watched movies, Comedy Central, Adult Swim (Cartoon Network), and the History Channel (less and less as they added more and more reality shows). I can get movies from the library, and the rest are available online.

I have a buddy in Milwaukee who has an antenna on his roof and pulls in some nice channels. I don’t have that option. I live in an old apartment building that was retrofitted with cable. Each apartment has its own jack. I’m on a lower floor. Anyway, my computer’s TV tuner card and the TV in the bedroom are analog, so I would need converter boxes, and, again, only to pull in broadcast channels.

A big stumbling block in making this decision has been psychological. I’ve lived with television my entire life. I’m part of the first TV generation. As a child, I was often left alone with the TV. TV is one of my parents. I’ve been telling myself that I need instant access to news in case of another situation like 9/11, or worse. But, in reality, CNN.com covers it just as well as CNN the cable channel. In a dire emergency, my neighbor is right next door and he has two TVs. I have a key to the place (for feeding his cat) and he has said I can stop by anytime I need a TV fix.

I recently got into it, again, with TWC over service issues, so that helped me make this decision, too. I’ll see how it goes. If I go into withdrawal, I may add the Basic Tier back to my services. I think, though, that this may be the next step in my evolution into a creature of the internet. For the past few weeks, I’ve had classical music playing online all day long. It has set a new tone to my apartment. Maybe the lack of exposure to TV will turn out to be a good thing.
Posted by OrbsCorbs at 5:53 PM

Hulu has free programing and if you have RR turbo, it streams like a TV just fine. I'm playing with netflix online. $7.99 a month, pretty much everything except they don't CC more than 15% of their selection.

Just went thru the no t.v., phone or internet when I moved and was waiting for cable to come and hook me up. Had 5 days without - did not miss t.v that much, enjoyed NPR and other channels, had the cell phone but what I missed the most was the internet. Grew up without t.v. till I was just about 8-9 years old, read a lot and actually played games and such. I missed my e-mail, JTI, Racine Uncovered and a few other I read daily - not really the JT unless I want to get upset. What did we do before any of this? No matter how old we are we have all become rather dependent on our technology.

I live alone and the TV is my room mate. The moment I'm up or when I com home it's on...till I go to bed. You're right tho there isn't a lot of good stuff. I like channels 10 and 16, tho. One nite the TV went out and it was like I had NOTHING to do. Your are a greater man than I. I have the internet also and I got caller ID on it so I don't have to break my neck to see the ID on the TV. Good luck Huck!!!

There are more people cutting the wire. Many (but not all) of the shows I watch are streaming. I expect that within a year or two, I will cut the cord (or satellite dish in my case) just because there are better options.

Good for you! Keep us posted on your experiment and how you do... I agree, grew up on it too. Now, if the internet goes down, I go through withdrawls.

I use T.V. mostly as a background noise most of the time. I have the news on, Food Network, History Channel or other learning programming. I would really miss it, I'm sure.

I didn't have it on that much, so I don't know that I'll miss it. My mom says she uses the TV for background noise, too, but I never have. Music/radio, yes; TV, no.

I agree about the internet. The few times that the TV signal has been affected, it had no effect upon me. But when the internet connection goes down or slows considerably, I freak out. Geez, I now realize that I used to watch TV during those times to get through them. Now I'll have to take heavy narcotics or something to sustain myself when the service is out.

I know about Hulu and like sites, and there are movies on YouTube and Google (mostly B stuff, except for the oldies), and elsewhere. I thought about Netflix, too. But I'm kind of hoping that I end up using what time I spent watching TV doing something else, not just watching it online.

I have copies of some movies and I've noticed a number of times that I would watch a movie on TV that I have a copy of, but never think to watch my copy. I'll sit through the movie with the commercials on TV, often in a crappy format and/or censored and/or chopped up, often after I've joined it in progress, but I never think to just put some time aside to watch the movie in its original format. I think it has something to do with the Boob Tube's power over us, the magnetic, mystical, electric eye I've been staring into for nearly 6 decades.

My Irish friend James Liddy was horrified by television's impact on our culture. He grew up without it. In a bar he would point to all the people staring at the TV and say, "They could all be having a wonderful conversation."

I used to have that as an ideal.. wanted to try life without TV for something like a year.. never happened, probably never will..

Good luck Orbs. I know I need the TV for sports, history channel, and food network but that's about it. The rest is a bunch of gibberish. Maybe a little Telemundo with the mute on. lol

Orbs I know how it is growing up watching t.v. with the family. When my kids were younger I tried to get them outside doing something instead of in front of the t.v.. But then that is were there dad always was so the kids thought it was alright to do that. For me I can do without the t.v. I would rather be outside doing something or listening to music. Only be outside when it is warm out not in the winter. I wish you Good Luck on the no t.v..

There was a message on my answering machine from TWC "reminding" me of my appointment for a service change. I didn't make any appointment. It said their technician would be here between 6 and 7 PM tomorrow and someone 18 years or older had to be present. Wtf? No one had to be present when they activated my TV service. So I called the number they left, where a recording again reminded me that someone had to be home tomorrow between 6 and 7. I finally got a human being and she agreed that there is no need for anyone to enter my apartment tomorrow. The technician (I use the word very loosely) only needs to access the cable box(es), which are outside.