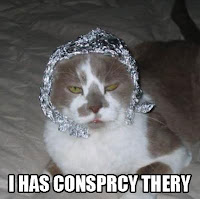 I will state right off the bat that those of you that know me will remember that there is a side of me that is a full out tin foil hat Mel Gibson conspiracy theorist. And while I am glad that Usama (you say Osama, I say Usama..... lets call the whole thing off) has assumed room temperature, there are some strange things and conflicting information now coming out that ticked on my spidey sense.

What is below is a collection of that is floating around out there, plus inconsistencies coming out in the MSM of the US, Britian and al-Jazzera. I do not necessarily subscribe what is written below, but something doesn't smell right.

For instance, it first comes out that we have the body, then it's buried at sea because of Islamic tradition. But under Islamic law, people can only be buried at sea if they died there.

It comes out via ABC that they identified the body based on DNA testing taken from the brain of Usama's dead sister at Mass General. We cant get DNA testing from a crime lab for months, but they can do Usama's within a couple of hours? Then CNN states that the US used only facial imaging to confirm it was Bin Laden.

When we got to Saddam, and his sons there was photo and video evidence. All we see here is a burning building, and some locals dragging the helicopter (that was either shot down or had a mechanical issue, based on who is stating it)out of the area.

There are also claims that Bin Laden actually died 8 years ago either due to kidney failure, or a US bombing raid in the Tora Bora mountains.

One theory has it that the reason there was a kill instead of a capture (like Saddam) is that they got in there and had the wrong guy, and it was a kill 'em all and quick body dump.

In addition, why was there an American woman in the room when they got there, and why did she shield Bin Laden with her body?

And who were the others killed. Where are they?

Some are questioning the timing of this, with low poll numbers, highest ever gas prices and economic policy failures and the 2012 campaign right around the corner.

This will be interesting as it unfolds. Glad I went to Sam's club and got the mega roll of foil!
Posted by RWWackoStu at 9:19 AM

yep. And Obama wasn't born in the U.S. either. And Elvis is still alive.

Obama was born in the us, and Elvis didnt die, he just went home.

I think all of these questions will be answered. The news just broke. There is bound to be controversy in reporting. For some, the answers will not be sufficient. That is always the case.

I'm not wearing a foil hat. I think anything that can make our government look strong and unite us as a country at this low point is probably a good thing. We are far too divided as a people and everyone is panicking about the budget deficit and rising costs.

Stu, Thanks for the info, I agree with KK, we need some time to get the details straight, but I want some cold hard facts, no mumbo-jumbo. Sorry for being a dumb ass, but what is a "foil Hat"?

A tin foil hat is a piece of headgear made from one or more sheets of aluminum foil or similar material. Alternatively it may be a conventional hat lined with foil. One may wear the hat in the belief that it acts to shield the brain from such influences as electromagnetic fields, or against mind control and/or mind reading; or attempt to limit the transmission of voices directly into the brain.

The concept of wearing a tin foil hat for protection from such threats has become a popular stereotype and term of derision; the phrase serves as a byword for paranoia and persecutory delusions, and is associated with conspiracy theorists.

If you watched the X-files, it would pertain to the "Lone Gunmen" trio.

We don't have the body anymore? Wtf?

I'm with Stu. We've been lied to so many time by so many different "officials" that I now assume they're lying unless proven otherwise.

To be blunt, the death of this murderer affects my life not one whit. The collapsing economy, however, has ruined it. They should be hunting down and shooting the speculators that wiped out the savings of millions of people. Instead, they are rewarded with the high life and we eat beans.

Jedwis - you might want to see the Mel Gibson movie "Signs". It's not the best but the "foil hats" are amusing.

As for Osama I guess it would be difficult to take a good picture when one has been shot in the head. From what I've read so far he knew it was the Americans that got him and for that I am happy.

Why was the body dumped? If they could drag it out to sea to dump it, why couldn't they return to base with it? They said they didn't want the body to become a "shrine". How could that happen if it was on an American base and then flown to the USA?

I'm already leaning toward this being another government lie.

Btw, I killed a bigfoot yesterday. He stunk real bad so I threw the body in the lake, but you can believe me.

I think it was Signs - where Mel was a minister who quit the Ministry after his wife was hit by a car while walking. Had Joquin Phoenix in it.
Crop Circles were the "signs".

I now get where you were going with it. Thanks for clearing it up.

Osama's body was a problem. Can't bury it somewhere or you make a shrine for martyrs. Politically, you don't want to really desecrate the body. Burial at sea might seem like an easy out. Do the Muslim ceremony and wash your hands of it.

Strangely enough, I mentioned to my father last night while watching the press conference that charges of conspiracy would spring up instantly. How predictable.

Mary & Stu.... Now you both have me very confused. lol And I don't even like Mel Gibson. I think Stu's Wikipedia definition does just fine by me.

orbs, info on why the body was buried at sea, including video from ABC news...

What a man Bin Laden was. Not only did he get people to commit mass murder, it's being reported now that he used his wife as a shield to dodge the bullets.
What a friggen coward he was.

And I think it is total bullshit if Obama trys to take any credit for catching him!

They got a "tip" in August, 8 months later they caught him. * months...why so long and will the "tipster" collect the 10 to 12 million dollar reward?

I did wonder why they got rid of the body so fast. Of couse if they kept it there might be riots. You don't think they fibbed to us about the body, do you?

RW: I should have worn a "Tin Hat" at that last place I worked. I wouldn't be so "Nuts"

I have tinfoil covering all of the windows in my apartment. My truck, too. Kinda hard to drive that way...

I just had dinner with a friend tonight who teaches religious studies. He said that in Islam, if you do not have a burial plot when you die it is common for the person to be "buried" in a nearby body of water (which can be a lake, river or ocean).

Ser, although I don't think anyone should say Obama poops rainbows (oh, you have to see the hilarious facebook pic of him going around) I think he deserves at least a tad bit of credit. He gave the go for the mission and you can bet he would be taking a LOT of heat if it went wrong...only fair he gets a share of credit (along with the personnel who carried it out of course). I have to look it up, but have heard even Hannity and Limbaugh gave him props today (although I am sure it will be short lived!)

Boppster, I guess when I was thinking about giving Obama too much credit, last night (like as idiot) I stayed up half the night watching the news and on one of the networks one of the questions was, “how much do you think or will this play into Obama running for re-election”?

All the facts aren’t even in and you’re talking re-election, get the fudge outta town!

The word “Hero” was tossed around like a volleyball last night. Obama a hero because he said go...Hell no, that’s his job! Are you a hero at work when you do your job which you are getting paid to do? You are right about ‘taking the heat’ but it comes with the job!

If I was getting paid a fist full of dollars, you can call me anything you want, just don’t call me late for supper!

Strange, a peanut farmer gave the go ahead for a failed hostage rescue and he has shouldered the blame for decades. If we use the same analogies, it just wasn't his fault. Now because those analogies are convenient for political agendas, they are slapped in place. Not impressed at all SER.

Huck: "And that's the name of that tune"