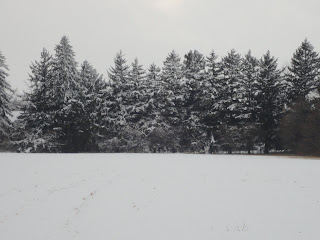 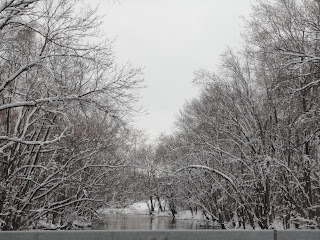 I hope everyone made it safe on Friday were ever you had to be.
Posted by Tender Heart Bear at 9:47 AM

This winter is perfect for lulling us into a false sense of security. I'm still expecting a 12" blizzard - in May.

I didn't have to deal with the snow, but I saw it form my windows. Yup, stuck to everything, then fell off.

Thanks for the photos, THB. The snow always looks beautiful like that, but it's a pain in the butt to deal with.

I especially like your picture with the river. The clinging snow was very beautiful... Humble Park's chain link fence was solid. You could not see through it. Washington Park golf course was amazing. It was a mess trying to get to drive in the morning, though. The side roads were still deep with ruts.

Nice pictures!! It's good to see pics of 'back home'

I just couldn't pass up taking the pictures. I looked so beautiful. I am glad you enjoyed them as well. Thank you for your comments.