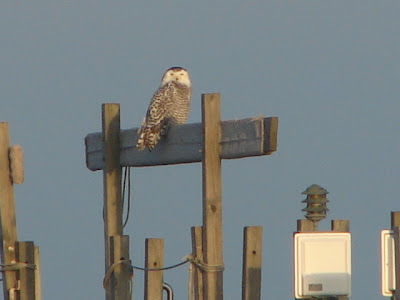 I'm going to try something here and see how it goes.... One or twice a week, I'm going post a "profile" on a creature that I have photographed in the past year. My goal is to increase awareness of the wildlife around us.

Many of us are familiar with Hedwig, the Snowy Owl of Harry Potter Fame. Little do many know that Snowy Owls can be found around here. Snowy Owls mainly breed in the northernmost regions of the Arctic tundra of Alaska, Canada and Eurasia. Some will migrate southward during the winter depending on their food supply of mice and lemmings. These highly nomadic birds will often feed other small mammals and birds.

Although they are rare to uncommon in Wisconsin, you find them in open fields,airports and harbors that have the tundra like appearance. Scan the posts, hay bales, rocks, silos that would give them high ground for them to search for prey. They'll often sit there for hours.

This picture was taken at the South Shore Yacht Club in Milwaukee on December 14, 2012. I had been reading reports on her sightings at the club. She has been hanging around in the area for about week. (She still may be there) Tender Heart and I decided to try our luck. When we got there, we had no trouble in finding her. We just followed all the photographers that were there already. One guy had traveled all the way from Madison just to take pictures. I had spent about a half an hour there taking many pics.

Oh yeah, the heavy barring suggests this is a young female.
Posted by drewzepmeister at 7:51 PM

I saw an owl that was all white a few years back while golfing in Beaver Dam, not far from Horicon Marsh. It was huge.

I guess it was a male snowy owl I saw at Old Hickory Golf Course on Hwy 33 Beaver Dam. It sat near the 10th green as I walked by on I think a fall day. Wish I had a camera with.

This is the best time of year to observe when the owls travel south in search for food.

Thanks for the photo and the info, drew.

Good stuff Drew. The OWL, Is only 2nd to the Eagle as a Bird of Prey. They are just too neat.

There was one of these sitting on the roof of one of the local high schools before the holiday break. It was there most of the day. From what I understand, they rarely travel this far south?

It's always a great feeling to see a Snowy Owl. I've only seen four of them in my lifetime.

kk, it varies from year to year. They have been sighted as far south as in Tennessee (2008). It all depends on the food supply in the north. This year seems to be a good one to see them. There has been confirmed sightings in Milwaukee, Sheboygan, Manitowac, and by the Kenosha airport.