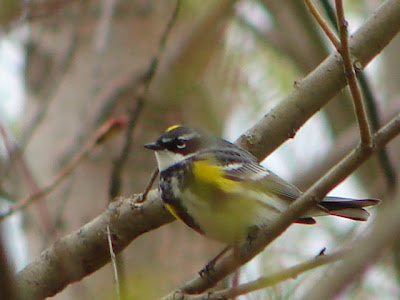 It's that time of year.... The warbler migration has finally reached its peak, sending flocks of birders into the woods with hopes of tallying up their life lists.

Wisconsin is the host to 42 species of these highly active and colorful birds. Personally, I have only seen 24 of these species. They spread across the state in a wide range of habitats with a majority of them taking a liking to dense woodlands. Finding them is not easy.

If found, photographing them can be a nightmare. They flit from tree to tree, branch to branch-always in motion..... It goes something like this: See bird. Focus in. Snap picture. Get a wing. Try again. Get a blur. Try again, miss it completely and get branches. Try again, bird gone. Pull hair out and cuss. Repeat process until you get lucky. 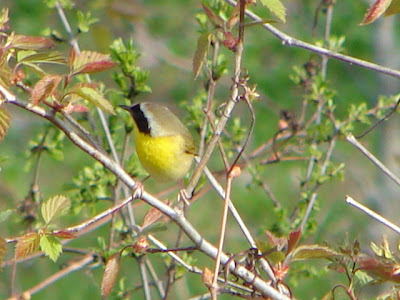 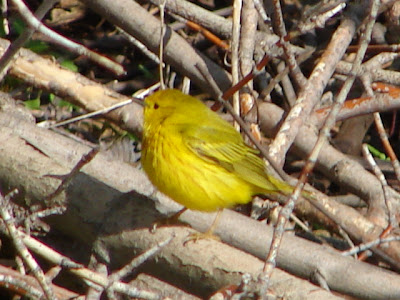 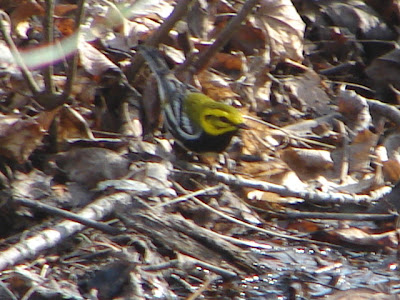 If you wish, NOW is the time to see them! That is, BEFORE the leaves finish covering up trees, making them really difficult to see. One of the state's hotspots is Racine's very own Colonial Park, located on West High Street by the Root River. Presently, the Hoy Audubon Society is having warbler walks at Colonial Park on Wednesday nights at 5:30 during the month of May. That's were I have seen most of my warblers. I'll leave you with a picture of a Palm Warbler taken at the "Ponds" Subdivision in Caledonia on 4/23/2013. 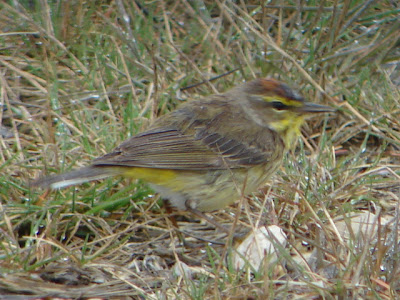 Posted by drewzepmeister at 10:55 PM

I get a lot of these little yellow and red guys in my yard. I thought the variances between them were just that; I didn't realize they are actual, classified specie differences. I'll have to watch more closely.

I have a couple pictures of one who likes to sit on my back picture window and look in at me. He is a peeping Tom at heart.

Drew, there was a very pretty Cardinal in my pine tree the other day and I couldn’t get to my camera fast enough.

When I lived on the farm, there were some birds with a yellow belly and I believe they called them a Yellow Belly Sap Sucker. Pretty little thing and fast!

A person needs one of those camera's about the thickness of a credit card to carry at all times. ALWAY'S without when needed.

Yellow Rumped Warblers are by far the most common. This year I've seen a fair share of Redstarts, Palm and Magnolia Warblers.

Warblers come in all colors. The Ovenbirds and waterthrushes are brown. The Black Throated Blue Warblers and the Carulean Warblers are blue. Well the Black and White Warbler is rather oblivious.

SER, Cardinals are quite common, hopefully you get another chance!

The Yellow Bellied Sapsucker is a specie of a woodpecker. My photo of it.

Toad, I try to keep my camera with me at all times. You never know....

Great pics! I've seen some Oriels hanging by my house.

Thanks for the photos of the shy warblers, drew. Warble on, my fine feathered friends.