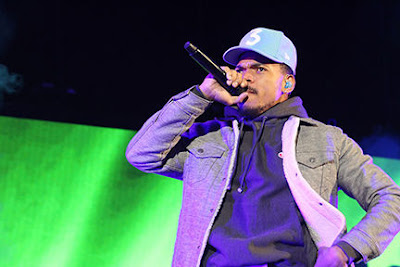 Chance the Rapper made a surprise appearance as a guest weatherman on Chicago’s WGN 9 during the 15th annual WGN Morning News Toy Drive. The Grammy-winning artist is a Windy City native.


Don’t do this at home

Jay Swingler had gained more than 800,000 YouTube followers with videos of him doing insane things to himself. But he went too far when he cemented his head inside a microwave with Polyfilla, a quick-dry concrete. Although he wore a grocery bag over his head and used a breathing tube to avoid suffocation, his head got stuck in the oven. It took five firefighters, more than an hour to save his life. It’s all on YouTube.

A gay man denied a marriage license by evangelical Kentucky county clerk Kim Davis has decided to challenge her re-election bid in 2018. Davis went to jail in 2015 for defying federal law by refusing to issue the license to David Ermold and his now-husband David Moore. That made Davis the martyr du jour of the Christian right, despite the fact she’s been married three times and conceived a child out of wedlock.

A 27-year-old “spiritual guidance counselor” in Bristol, England, told a British morning TV show that she’s had sex with at least 20 ghosts — and she prefers them to men. Her first experience came 12 years ago. She had just moved into a new house, where she felt the presence of a strange “energy” that later “became physical.” She said her affair with that ghost lasted three years and ended when her husband came home early from work and saw the shadowy shape of a man through the window.

The value of Santa Claus’ North Pole home increased 6.5 percent over the past year to $710,559, according to a news release from Zillow. The cozy cabin, which boasts a floor-to-ceiling river-rock fireplace and a gourmet kitchen, is also equipped with a hot cocoa tap and an oven with 12 different cookie settings. To calculate the Zestimate of Santa’s home, Zillow looked at comparable homes in remote locations and applied a “Santa premium.” Zillow forecasts the value of Santa’s home will appreciate another 7 percent over the next year. But will he get to deduct his property taxes when April 15 rolls around?

Fans of National Lampoon’s Christmas Vacation will chuckle. Officials in Sea Girt, New Jersey, were puzzled when wires to the town’s Christmas tree and display were found torn. Vandals? Nope. A squirrel. Police posted a photo of the culprit on Facebook and stated the squirrel was “charged with criminal mischief and released on bail.”

We came across these spectacular stats about the New York City Rockettes’ Christmas Spectacular: Rockettes must be ready to do 300 eye-high kicks a show. A Rockette burns about 1,000 calories every show. Between the “Parade of the Wooden Soldiers” and “New York at Christmas,” the Rockettes have 78 seconds to change socks, shoes, pants, jackets, gloves and hats. After the show, many dancers sit in a bath cooled by ice to about 45 degrees.

Author Christopher Bollen recently won the Bad Sex in Fiction Prize for his novel The Destroyers. The thriller — set on a Greek island — has won critical praise, but Bad Sex judges crowned Bollen a winner for a passage comparing a male character’s genitalia to a billiard rack. Literary Review started the award in 1993 to spotlight “crude, badly written or perfunctory” passages of sexual description in fiction. The late John Updike was awarded a Bad Sex lifetime achievement award in 2008.

The children’s book Where’s Waldo? Santa Spectacular is among the 10,000 books banned from Texas prisons. Harry Potter: Film Wizardry also is banned by the Texas Department of Criminal Justice, according to The Dallas Morning News. However, inmates can check out a copy of Adolf Hitler’s autobiography Mein Kampf and two books by former Ku Klux Klan Grand Wizard David Duke.


The lady doth protest too much?

In Pennsylvania, a male Republican state representative stunned his colleagues during a committee meeting when he went on a homophobic rant. After a male Democratic lawmaker tapped his arm to get his attention, he shouted, “Just, look, I’m a heterosexual. I have a wife, and I love my wife. I don’t like men, as you might, but stop touching me all the time.” Then, just for good measure, he added, “You have people on your side of the aisle that might like it. I don’t.” The bizarre incident was caught on video and created a stir on the internet, where most commenters pronounced him an obvious closet case.

Get more WigWAG at wisconsingazette.com/blogs/wigwag.
Posted by OrbsCorbs at 12:50 PM