A day after Pope Francis ended his trip to Chile by publicly defending a bishop who victims have accused of covering up widespread pedophilia in the country, by attacking the credibility of child sex abuse victims in a shocking move made at the end of a trip which he had hoped to 'heal' the wounds of said abuse, The Holy See has stunned Catholics again... and apologized.

As we detailed over the weekend,  Associated Press reported that Francis made the shocking comments in a discussion about Rev. Fernando Karadima who has been found guilty of sexually abusing a slew of minors as a member of the Catholic Church.

Pope Francis accused victims of Chile’s most notorious pedophile of slander Thursday, an astonishing end to a visit meant to help heal the wounds of a sex abuse scandal that has cost the Catholic Church its credibility in the country.

“The day I see proof against Bishop Barros, then I will talk. There is not a single piece of evidence against him. It is all slander. Is that clear?” the pope replied in a snippy tone.

The pope’s remarks drew shock from Chileans and immediate rebuke from victims and their advocates. They noted the accusers were deemed credible enough by the Vatican that it sentenced Karadima to a lifetime of “penance and prayer” for his crimes in 2011.

A Chilean judge also found the victims to be credible, saying that while she had to drop criminal charges against Karadima because too much time had passed, proof of his crimes wasn’t lacking.

And now, as Reuters reports, Pope Francis, in an extremely rare act of self-criticism, apologised to victims of clerical sex abuse on Sunday, acknowledging he had “wounded many” in comments defending a Chilean bishop who is under scrutiny.

However, while the pope was sorry for his choice of words, he hastily added that he was certain that the prelate, Juan Barros, who has been accused of being complicit in the cover-up of the disgusting acts, was innocent.

“I have to apologise,” an unusually contrite pope told reporters aboard the plane returning to Rome from a week-long trip to Chile and Peru, saying he realised he had “wounded many people who were abused”.
“I apologise to them if I hurt them without realising it, but it was a wound that I inflicted without meaning to,” he said. “It pains me very much.”


But, in the latest twist to a saga that has gripped Chile, Francis said Barros, who is accused of protecting a notorious paedophile, would remain in his place in the diocese of Osorno because there currently was no credible evidence against him.


Francis said on the plane: “I know how much they (abuse victims) suffer in hearing the pope say to them ‘bring me a letter with the proof,’ I realise that it is a slap in their faces, and now I realise that my expression was an unfortunate one”.


In his comments on the plane, the pope disclosed that Barros had offered to resign twice in recent years but Francis rejected the offers.


“I can’t condemn him because I don’t have evidence and because I am convinced he is innocent,” Francis said.


He said Barros would remain in his place unless credible evidence is found against him.
Juan Carlos Claret, a spokesman for anti-Barros Catholics in Osorno, southern Chile, said during the trip that he worried the pope’s response to the reporter before the apology would discourage more victims from speaking out.


“What incentive will victims have to come forward when even if the courts and the Vatican have said they are right, in the end the pope says they are pure lies?” he said in an telephone interview. 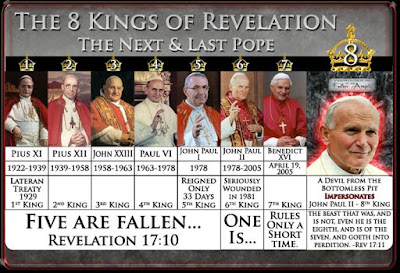 Posted by Clint Teeters at 7:36 AM

The Catholic Church is an abomination - and NOT even Christian!

The answer is NO!

You cavort with the Devil at your own risk!