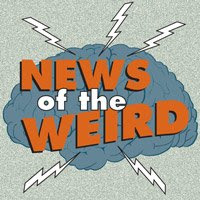 by Editors at Andrews McMeel Syndication


Time in a Bottle
Environmentalists decry all the debris washing up on beaches around the world, but a discovery in January near Perth, Australia, has historians thrilled. The Washington Post reported that Tonya Illman and a friend were walking along the beach when she spotted “a lovely old bottle.” Inside was a damp note, tied with string. “We took it home and dried it out; it was a printed form, in German, with very faint German handwriting on it,” she said. Experts at the Western Australia Museum have determined the note was 132 years old—24 years older than the previous record for a message-in-a-bottle discovery. The note was dated June 12, 1886, from a ship named Paula. Further study revealed that a German Naval Observatory program was analyzing global ocean currents in the area between 1864 and 1933, and an entry in the Paula’s captain’s journal made note of this very bottle being tossed overboard. Thousands of other bottles were released into the sea as part of the program, of which only 662 have been found. Prior to Illman’s find, the previous such bottle was found in January 1934.
Otterly Horrific!
Kayaker Sue Spector, 77, was out for a leisurely paddle on the Braden River in Florida with her husband and friends on March 4 when someone remarked, “Oh look, there’s an otter!” No sooner had the words been spoken than the aquatic mammal jumped onto Spector in her kayak and began clawing and scratching her arms, nose and ears. “He wouldn’t let go, and I kept screaming. I kept beating him with a paddle,” Spector told FOX13 News. She later required stitches, antibiotics and rabies treatment. It was the second otter attack in two days, and Florida Fish and Wildlife has now posted signs about an “aggressive otter” near the area.
Aged to Perfection?
The Carelse family of Lakewood, Colo., picked up some groceries at the Walmart in Littleton on March 5, including a box of Quaker 100% Natural Granola with oats, honey and raisins. When they sat down for breakfast the next morning, they told KMGH TV, Anthea Carelse noticed that the “best by” date on the box was Feb. 22…1997—more than 21 years ago. Her husband, Josiah, ate his full bowl and didn’t suffer any unpleasant consequences, but Anthea stopped after two bites. They planned to return the box to Walmart.
One Big, Honking Proposal
Saturday, March 3, was a big day in Key West, Fla., as competitors sounded off in the 56th Annual Conch Shell Blowing Contest. For 70-year-old Mary Lou Smith of Panama City Beach, winning the women’s division was topped only by a marriage proposal (which she accepted with a hearty honk from her shell) from fellow competitor Rick Race, 73, also of Panama City Beach. The Guardian reports that the large shells were used in the 19th century by seafarers as signaling devices, and dozens of entrants show off their skills each year at Key West’s Oldest House Museum.
The Old Squeeze Play
On Monday, March 12, in Northumberland, England, a car thief making a getaway in a Mini Cooper S discovered the small car was not quite small enough to navigate a narrow stone staircase in Carlisle Park. Local police were called to the park around 11:30 p.m. where they found the car and its unnamed 31-year-old driver both wedged tightly between the staircase walls. Area residents speculated in Metro News that the driver might have been trying to re-enact a scene from The Italian Job—a 1969 movie with just such a scene. “I’m sure the older Minis would have got down no problem,” said Chris Stoker.
Wait, What?
An unnamed Russian woman stunned tourists and onlookers on Saturday, March 10, when she walked into the Red Sea and, with the help of a doctor and her partner, gave birth. From the balcony of her uncle’s apartment in Dahab, Egypt, Hadia Hosny El Said photographed the events as the doctor carried the newborn and its father walked alongside with the still-attached placenta in a plastic bowl. After a few minutes, the mother emerged from the sea to join her family, including a toddler, on the beach. El Said told The Daily Mail the doctor is Russian and specializes in water births.
© 2018 ANDREWS MCMEEL SYNDICATION