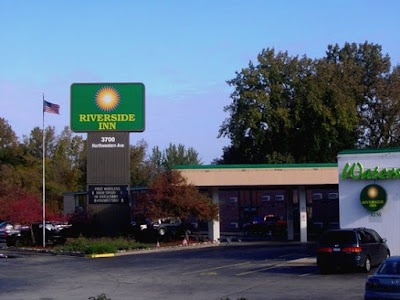 
"RACINE — The Racine Police Department is investigating a suspicious death that reportedly occurred at a local hotel on Friday.

"Police responded to the Riverside Inn, 3700 Northwestern Ave., for a report of an unresponsive male, according to Racine Police Sgt. Adam Malacara. Someone reportedly called 911, but then left the scene. The male victim was reportedly unable to be revived.

"Due to the circumstances, the death was determined to be suspicious. As of Monday afternoon, police had no updates, Malacara said."


Maybe we could turn the Riverside Inn into a reality show.  Give a guy a camera and a sound man and follow around employees and guests.  I bet you it would be a hit, at least in the Racine market.
Posted by OrbsCorbs at 5:13 AM