"THB, I'm sorry about your mom. Dehydration is pretty common, but the pneumonia and fluid in the lungs don't sound good. I'll say a prayer for her, and you. 1) Do you remember the last time you colored Easter eggs? In the seventies, with my then-wife. 2) When was the last time you got all dressed up for Easter? 60 years ago. 3) When you were young did your parents hide your Easter Basket? No. 4) Do you remember getting your picture taken with the Easter Bunny? Never. That thing freaks me out. Have a good week, everyone."


From the mouths of … adults?
On March 14, when students nationwide walked out of their classrooms to protest gun violence in schools, the National Rifle Association tweeted a photo of an AR-15 — the weapon used at Marjory Stoneman Douglas High School and at many other mass shootings. The tweet read: “I’ll control my own guns, thank you.” 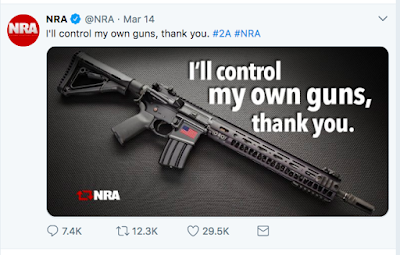 Walking high
A straight and cisgender Australian man started wearing 6-inch stiletto heels to work every day after a female colleague told him that “her heels made her feel powerful.” And he did, too. “I’ve never felt more empowered than when putting on a pair of stilettos and walking through a marble lobby,” said the project manager for a major bank.
Hometown pride
Rep. Drew Christensen, a member of the Minnesota House of Representatives, promised to draft a bill banning Arie Luyendyk Jr., aka The Bachelor, from the state. He and other Minnesotans are outraged that Luyendyk broke off his engagement to Minnesotan Becca Kufrin — and on the air, no less. On Twitter, a Minnesota police department dared Luyendyk, a former race-car driver, “to drive fast through Shakopee, MN,” which neighbors Kufrin’s hometown of Prior Lake.

Twitter Ads info and privacy
Middle School ‘Millionaires’
Students at Lenox Memorial Middle and High School in Lenox, Massachusetts, voted to keep their Millionaires mascot and nickname. In the high-turnout election, 51 percent of students voted to keep the name, which AP described as a tribute to wealthy out-of-towners — “cottagers” — who built mansions during the gilded age and employed the locals.