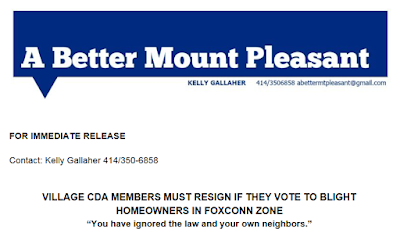 MT. PLEASANT, WI April 12, 2018 - ​Local community group, “A Better Mt. Pleasant,” is calling on members of the Mount Pleasant Community Development Authority (CDA) to resign from their appointed positions if they vote to designate areas within the Foxconn development zone as blighted. The vote is expected to happen on Tuesday, April 17, 2018 at 6:30 pm at the Village Hall.

Residents have already received notice of eminent domain proceedings and Village officials announced on March 20, 2018 at a CDA public hearing that they intend to invoke “blighting” condemnation against property owners in the land acquisition process for Foxconn.

“Most of these homeowners haven’t even entered into negotiations with the Village before they decided to play the ‘blight’ card,” said Kelly Gallaher, a representative for the group. “The CDA has been given detailed information on why these properties do not meet the legal definition of ‘blighted.’ They have ignored the law and their own neighbors, and appear poised to do it anyway.”

Gallaher says, “There is little doubt that actions to blight these properties will lead to a lawsuit which will not just cause problems for the FoxConn development, but could set a very dangerous precedent. If Mount Pleasant is allowed to blight perfectly good family homes and give them to a privately owned corporation, they can do it to anyone, anywhere.”

The Mount Pleasant Village Code of Ethics ordinances state that any public official who knowingly acts in excess of their legal authority and official capacity has committed misconduct in office.

Any member of the Mount Pleasant Community Development Authority who casts a vote to impose condemnation through blight against property owners in the Foxconn zone does so knowing they are violating state law and is therefore called upon to immediately resign from service on the Village CDA.

A petition calling for the resignations can be found online through ​Change.org​.

“It took only seven votes to appoint these men to the CDA. We are prepared to offer hundreds to demand they step down,” said Gallaher.