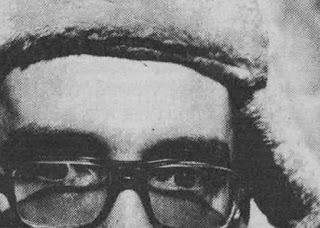 I’m Art Kumbalek and man oh manischewitz what a world, ain’a? And the answer is yes, I am prepared to assume the office of the presidency of the United States whenever the vacancy arises, and from what I hear from the real news lately, oh boy, that could be any day now, I kid you not.
I’m not sure how my ascension to the top spot would be accomplished legally with the Constitution and what-not, but with Trumpel-thinskin soon to get the heave-ho on his way to the hoosegow, I’m a logical choice to be appointed simply based on the fact that I’ve run for the office more than anyone else in the whole goddamn country—every four years since 1986—and that’s got to count for something, what the fock.
And there would be some continuity through the transition to help heal the country in that the former president has orange hair while I, the new president, wear an orange hat. And rest assured, I’ll have no need for hot-shot lawyers, or low-shot lawyers—can’t afford any kind of lawyer for crying out loud.
But you’d like to see my tax returns? Hey, so would the IRS. Get in line. You betcha, me and taxes don’t go so well together, which is probably why I always get so damn depressed this time of year. But when you talk taxes “coming up” for a guy like me, you’re talking dry heaves, baby. That’s because, personally, I believe strongly in a balanced budget and to achieve that, I’ve got to cut personal spending and although it’s a tough choice to make, the first item on my “to cut” list is payment of “income tax due.” We all got to make sacrifices, ain’a?
Now, I assume there may be a congressional committee or two that would prefer to run a background check on me before they hand me the key to the Oval Office, so I’ve prepared an official statement because the last thing we need is a president who does not maintain the highest of ethical standards. So here she be:
Dear members of Congress, let me tell you’s that from a’ high atop this post I perch upon as senior-in-service essay writer for the media giant known as the Shepherd Express, I do categorically deny all crybaby claims to the effect that I’ve grabbed gratuitous gifts and dough from under a table—free kind of stuff that was meant to put the influence on me so that I’d use my powerful position as opinion-maker to somehow make people jerk around like a bunch of puppets just because some rich knobshine greased my string, what the fock.
No sir, I am neither puppeteer nor focking puppet who can be cheaply manipulated by just any Tom, Dick or Dickless come down the pike with some kind of private interest they’d like me to ballyhoo.
And I also acknowledge in a state of conscious if not conscience that nothing of the sort has been offered; so naturally I can say most ethically that I have accepted not a focking thing above and beyond the buck two-eighty I get week to week just for showing up around here.
And that may be a damn shame ’cause I can always use a couple, three extra bucks, and since no one has approached me, I could decide that it was up to me to do the approaching. I do admit to having contacted certain seats in power of foreign countries directly from a phone here in the Shepherd office ’cause I’ll be damned if I want any kind of overseas charge on my own bill.
What I do is call up and say I’m planning to devote one of my coming-up essays completely to international stuff and if you’d like some mention in an American press about your country, send me a couple hundred and maybe we can play ball.
You’d be surprised by how many foreign languages from other countries have no translation for the simple term “play ball”; thus they are doomed to a future of youthful suicide bombers instead of perpetual peace that might be achieved by flipping me a couple of bucks for a nice word or two. Fock ’em.
I will also admit that on occasion I have dialed up any old phone number I find on the internet’s white pages and offer to whomever gets on the horn a deal where I ask them for their name and if they send me twenty bucks, I’ll slip that name into my essay but that I’d be entitled to 7% of all potential future earnings such a mention may garner.
Know what? After I explain this incredible offer of a lifetime, you’d be surprised how many people I contact are named “Fock you.”
So I am clean, gentlemen and ladies, at least cleaner than the last focking guy. I look forward to serving you as your president, ’cause I’m Art Kumbalek and I told you so.