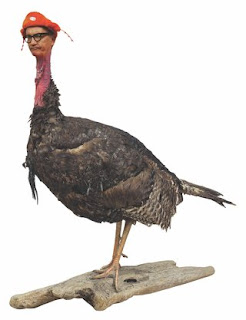 I’m Art Kumbalek and man oh manischewitz what a world, ain’a? So listen, here we are, another Thanksgiving for crying out loud. Didn’t we just have one last year, what the fock? What more can I say, so stop me, or don’t, if you’ve heard this before that you shouldn’t expect much of an essay this week from me for your Thanksgiving-holiday needs, no sir. I don’t have time to self-importantly gasbag some kind of treacly tripe about what we all have to be thankful for. My personal Thankful List runs from A to A, with A being that I’m thankful I’m not serving hard time with no chance for parole.
Although I could be convinced to be thankful that our focking Packers still have a chance to win six, seven games total this season—eight is a little optimistic for my blood—but I do think they’re a lock for third place in their division, I kid you not.
So no essay ’cause I got to get to the store and pick up fixings for my Thanksgiving feast, for which I enjoy boiling up a nice ring baloney because I cannot eat turkey out of respect for our Founding Fathers who dang near made it our national bird for christ sakes—I’m guessing because of the turkey’s much ballyhooed beauty and intelligence, what the fock.
And I guess had they made that decision, we would now be basting and carving the traditional Thanksgiving eagle come the fourth Thursday each November. Well, maybe not necessarily the eagle, but whatever bird it would be (tufted titmouse?), it sure as hell wouldn’t be the turkey ’cause you just don’t cram a thermometer up the butt of the national bird, I don’t care who you are.
But if it were to be the eagle for Thanksgiving, you know what? I got a sneaking hunch that it doesn’t taste just like a chicken, no sir. In fact, I got a funny feeling that the eagle tastes just like a woman’s saddle shoe, size seven, shoelace included. And so I guess I could be thankful that the Founding Fathers failed to make the gobbler our nation’s fowl symbol for all that’s noble and strong about our country. Besides, the turkey carries enough symbolic weight as it is, witnessed by the fact that we elect so damn many of them to Congress every couple years.
Also no essay since it’s been my experience that regular readers aren’t up to navigating my little section of this here back page this time of year anyways on account of either being struck down by the dropsies from the too-much holiday feasting or they’re busy navigating their way out of county jail due to the aggravated battery charge acquired right before the pumpkin pie was served at the extended-family Thanksgiving get-together. Yeah, I know, sometimes the in-laws really do deserve what’s coming to them, civil ordinance be damned, what the fock.
But before I go, it’s a yearly tradition of mine to provide to those of you’s who indeed may read this page before trotting off to your holiday obligation, a little something you can take along and share at your gathering, so you don’t just show up empty-handed as the free-loading fockstick your relatives, friends and acquaintances have come to expect, if not dread. So if you’re too damn lazy or depressed to bring a dish to pass, a humorous story would be a nice alternative, ain’a?
So a bunch of preachers are having a little ecumenical confab in the rectory of a Catholic priest. Just as they’re silently girding up to air out some of their differences, the good father offers each of them a whiskey to ease tensions, to clear the air of religious napalm, so to speak.
“Don’t mind if I do, thanks,” says the Methodist vicar, who belts down a good three fingers of Wild Turkey. “And you?” asks the priest of the fire-and-brimstone fundamentalist Baptist Bible-thumper. “What?!?!!” shouts the born-againer, shocked to his core. “Drink alcohol?! I’d rather debauch in a whorehouse!”
At this, the Methodist spits his whiskey back into the glass and hollers, “Whoa, Nellie! You mean we get a choice?” Ba-ding!
OK, “’nuff said,” ain’a, except to say that wherever you find yourself this Thanksgiving time of year, god speed and remember to fight the good fight, ’cause I’m Art Kumbalek and I told you so.