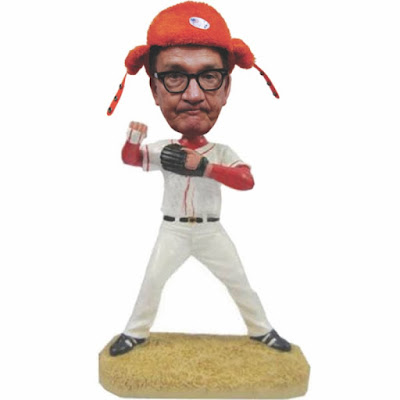 I’m Art Kumbalek and man oh manischewitz what a world, ain’a? So listen, about these naming rights for the Brewers’ Miller Park going to some kind of insurance outfit, I’m calling a “what the fock” on that play. Maybe some fans don’t think it’s a big focking deal. But what will they say when the mascot gets changed from Bernie Brewer to Petey Policy—some fockstick in a suit and tie—and every time the Crew hits a home run, instead of Bernie taking a ride down the slide, Petey parks his sorry ass behind a desk, whips out a pen and files a claim? Hey, you tell me.
And then I’ll tell you that the naming rights to this here page of essays are always darn-tootin’ priced right to go to the highest bidder: “Old Crow at Art for Art’s Sake,” “Art for Art’s Sake with Pall Malls.” I don’t give a rat’s ass what you want to peddle as part of the Art Kumbalek franchise, just as long as you pony up the yearly $100 grand it’ll take to do the deal, what the fock.
Anyways, I was out and about just the other day and some knob says to me, “Hey Artie, writing those essays must be good therapy, ain’a?” And I was reminded of a little story:
This gal goes to her psychiatrist ’cause she’s having big problems with her sex life, wouldn’t you know. The psychiatrist asks her lots of questions but wasn’t getting a clear picture of her problems. So finally he asks, “Do you ever watch your husband’s face while you are having sex?” And she says, “Well, yes, I did once.” The psychiatrist asked her how he looked and she said, “Very angry.”
The psychiatrist felt he was finally getting somewhere: “That’s very interesting but we must look into this further. Now tell me, you say that you have only seen your husband’s face once during sex, which seems somewhat unusual. How did it occur that you saw his face that time?” And she says, “He was looking through the window.” Ba-ding!
Yeah yeah you betcha, Artie’s his own therapist, how ’bout that. By cutting out the middle man, I figure I’m saving myself maybe about $150-$200 bucks an hour; so the drinks are on me. And as a therapist, one thing I know is that we can all use an extra pat on the back. Actually, I got a better idea. More than an extra pat on the back, we could all use an extra twenty in the pocketbook, what the fock. Hold on, I got an even better idea. How ’bout, say, you go see one of these psychiatric guys for a little shrink rap, and at the end of the session he gives you a crisp $100 bill and change instead of the other way around—“Hey doc, gosh. Thanks for the dough. I'm feeling better about myself already.” And isn’t that the point?
Fock if I know, but I sometimes do wonder what things would be like these days if there had been an outbreak of the psychology racket in the olden days. Say, back in the year 0027 or something, they pull Jesus in for a psych session: “Well, Mr. Christ, to me it looks like we’re dealing with a pattern of self-destructive behavior here. I’d say you were clinically depressed but that hasn’t been invented yet. This savior thing. It’s a grand idea, but practically speaking, what about the future? Do you actually see yourself doing this at 40, 50? And you say one thing, but then do another. ‘Love thy neighbor,’ fine. But then you go bust up their money-changing temple. What I’d like to do is see you weekly for the long-term. Who is your health care provider, Mr. Christ?”
Okey-dokey, let’s wrap up with a nice ice fishing story, considering the weather we’ve had:
This drunk guy decides to go ice fishing, so he gathers his gear and goes walking around until he finds a big patch of ice. He heads into the center of the ice and begins to saw a hole. All of sudden, a loud booming voice comes out of the sky. “You will find no fish under that ice.”
The drunk looks around, but sees no one. He starts sawing again. Once more, the voice speaks, “As I said before, there are no fish under the ice.” The drunk looks all around, high and low, but can’t see a single soul. He picks up the saw and before he can continue cutting, the huge voice interrupts. “I have warned you three times now. There are no fish!”
The drunk is abso-focking-lutely flustered, so he asks the voice, “How do you know there’s no fish? Are you God?” “No, douchebag,” the voice says. “I am the manager of this hockey rink.”
Ba-ding! ’cause I’m Art Kumbalek and I told you so.