Foxconn is confusing the hell out of Wisconsin 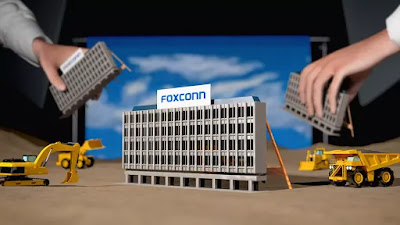 It was summer in Wisconsin, and Foxconn seemed to be everywhere. But also: nowhere at all.
Starting last June, officials with the Taiwanese tech manufacturing giant began popping up in all corners of the state and announcing new projects. It had been almost a year since then-Gov. Scott Walker (R-WI) offered the company a subsidy package that came to total $4.5 billion. Both Walker, who was in the midst of a reelection campaign, and Foxconn, which had just confirmed that it would build a far smaller factory than it had initially promised, seemed eager to make a good impression.
First, there was Louis Woo, special assistant to Foxconn CEO Terry Gou, announcing a new headquarters and “innovation center” in Milwaukee. Days later, Gou was standing in a field 40 minutes south in Mount Pleasant, digging gold shovels into the dirt with Walker, Paul Ryan, and President Trump, who declared Foxconn’s factory the “eighth wonder of the world.” Then it was off to Green Bay, where Foxconn announced another innovation center, and then Eau Claire, where Foxconn announced two more — a full “technology hub.”
“Milwaukee is where we will transition our AI 8K+5G vision into reality.”
Next came a $100 million gift to the University of Wisconsin-Madison, and a venture fund, and competitions to design the innovation centers, with fast turnarounds — just two weeks to submit proposals — and plans to open in just months. As summer turned to fall, Foxconn kept going: an innovation center for Racine, and another groundbreaking, for a Foxconn expansion at a nearby technical college. More branded ball caps, more gold shovels. One observer quipped that Foxconn had created jobs in the Wisconsin events business, at least.
Then the announcements stopped.
In January, work at the Mount Pleasant factory came to a halt, and Foxconn officials began to publicly waffle about their plans. In the span of a single week, Woo said that the company wouldn’t build a factory, then that whatever Foxconn was building “cannot be simply described as a factory,” then, after a call with Trump, that Foxconn would build a factory after all.
Throughout its gyrations, Foxconn maintained that it would create 13,000 jobs, though what those 13,000 people would be doing shifted gradually from manufacturing to research into what Foxconn calls its “AI 8K+5G ecosystem.” Other than buzzwords for high-resolution screens and high-speed cell networks, what this ecosystem is has never been fully explained. In February, a Foxconn executive cheerfully likened the company’s vague, morphing plans to designing and building an airplane midflight.

Read more:  https://www.theverge.com/2019/4/10/18296793/foxconn-wisconsin-location-factory-innovation-centers-technology-hub-no-news?fbclid=IwAR3uUYXI6H_Pp1NsQ3IQ-Z1ZTxNPKf25wxEHb5QQT56Oj1vqIdC6f9EJgb0
Posted by Clint Teeters at 5:24 AM