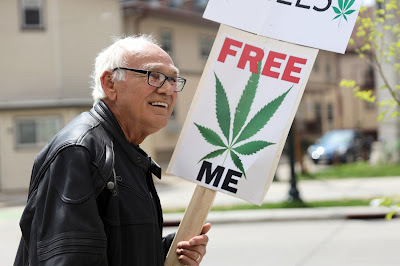 MADISON — Elected to represent the 48th Assembly District, state Rep. Melissa Sargent, D-Madison, has been “legislating through listening” to her 60,000 constituents since 2012. The stories and concerns she heard from voters in her district have launched Sargent on an unexpected journey, sending her on a mission that she never anticipated when she first ran for office.
Sargent, who says she has never used marijuana, has concluded that prohibition of the drug is ruining the lives of a large number of Wisconsin residents.
Sargent recalled talking to a mother whose child — a recent high school graduate ready for college — was pulled over for failing to use a turn signal and cited for marijuana possession. Sargent does not know what happened to the student, but she said such a ticket can lead to “egregious” consequences, including lost scholarships and housing.
At an April press conference, Sargent introduced Sarah Fabry, a registered nurse who used cannabis and later cannabidiol (CBD) to treat her Crohn’s disease, an inflammatory bowel condition. Fabry said she took care of patients desperate to get cannabis for loved ones with agonizing end-stage cancer pain. She believes legalization would ease a lot of suffering.
Fabry said her view of marijuana users has radically changed, from “the stereotypical pothead” to “your grandma, your spouse, your child, yourself.”
Such stories have prompted Sargent to three times introduce bills to fully legalize marijuana. On May 17, she introduced Assembly Bill 220, a fourth, updated version of that proposal.
Previously, Democrats Sen. Jon Erpenbach of West Point and Rep. Chris Taylor of Madison have introduced bills to legalize medical marijuana, but those measures did not pass. Taylor aide Chet Agni said a new medical marijuana bill is being drafted — and this time around, it has bipartisan support.
“I was on a pretty lonely ship about five years ago when I put this bill out,” Sargent recalled. “There were people quite frankly in the Capitol building that didn’t want to talk to me. They thought that I was I really out of touch.”