An 18-year-old South Milwaukee man has been charged with vandalizing Da Crusher statue.
James C. Dudgeon was charged with criminal damage to property. A 21-year-old man has also been identified but has not been arrested.
The statue, which honors South Milwaukee wrestling legend Reggie Lisowski, has stood tall over his hometown since June. Two months after the bronze attraction was unveiled during a joyous ceremony, it was vandalized.
The family of Lisowski noticed the damage Aug. 29 and reported it to the South Milwaukee Police Department.
Police discovered via surveillance video that two men approached the statue Aug. 24 and repeatedly struck it with a concrete block. They caused $1,200 in damage, police said.
The surveillance video was "instrumental in determining the time frame for the damage and helping police identify the people responsible," police wrote in a news release.
The damage was repaired over the weekend by Beth Sahagian, the South Milwaukee native who built the statue.
The statue was unveiled during a two-day festival called Crusherfest in June near 11th and Milwaukee avenues. It weighs more than 600 pounds.
The statue was the brainchild of area wrestling fan Chris Smith, an attorney for South Milwaukee. He launched a GoFundMe campaign in 2017 and raised $40,000.
Smith said he wanted "to thank the South Milwaukee Police Department for their hard work in bringing these turkeynecks to justice. Da Crusher Foundation will aggressively pursue criminal charges against any person who attempts to damage or deface the statue. The statue, like the man himself, will stand strong.”
Lisowski wrestled for about 40 years, beginning in 1949. He earned many championships during his run.
He died in 2005.
Dudgeon made his initial court appearance Saturday and pleaded not guilty. The court set a $200 signature bond. He is being held in the Milwaukee County Jail. 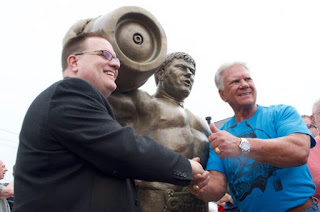