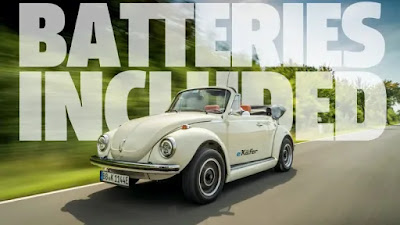 I knew that even though Volkswagen ended Beetle (including Beetle-dressed Golfs) production in July, they wouldn’t ever really be able to not build some sort of Beetle, and I think this announcement proves that to be correct. VW is partnering with German EV conversion company eClassics to do conversions of classic, air-cooled Beetles into EVs with modern electric drivetrains. The first one they’re showing is a 1973 Super Beetle convertible, and it looks fantastic. 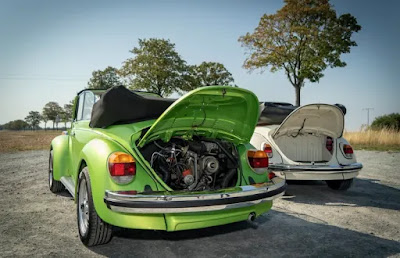 The really interesting part about all of this is how they’re doing the conversions. Unlike other vintage Beetle (and Bus, and Porsche 356, etc.) conversions we’ve seen before from companies like Zelectric that use an electric motor mated to the car’s existing transaxle and batteries placed in existing luggage areas, the VW/eClassic conversion is using the drivetrain from VW’s e-Up! city car
.
From what I can see from VW’s press pictures, it appears that the whole e-Up! transverse drivetrain has been transplanted to the back of the VW chassis, replacing the whole longitudinal transaxle/engine setup 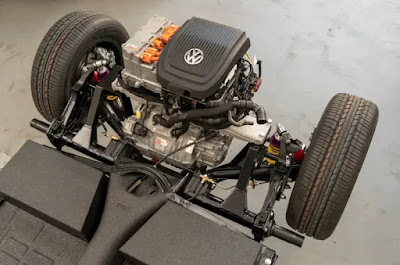 .
It’s a very nice, tidy setup, and the e-Up!’s power pack fits remarkably well in the back of the Beetle. I can see that some extra motor mounts and supports have been added to the rear torsion tube housing, and the frame “horns” that once carried the transaxle have been cut off. New rear shock absorber mounts seem to be added as well.

The drivetrain, being transverse, is a bit shorter than the original transaxle/flat-four setup, so its weight is more focused over the axle line, and as such is less of an “outboard” motor, which will likely improve handling a good bit.