There are already people lined up for Trump's rally.

Buy Photo
Elizabeth Sorenson, left, and her sister-in-law Linda Sorenson, behind flag, were the first in line for President Donald Trump's campaign rally. They set up their chairs at 4:30 p.m. Monday in the parking lot across from the UW-Milwaukee Panther Arena. Doors open at 3 p.m. Tuesday for the 7 p.m. rally. (Photo: Meg Jones, Milwaukee Journal Sentinel)
Linda Sorenson and her sister-in-law Elizabeth Sorenson set up their folding chairs, unfolded blankets and a Donald Trump 2020 flag and settled in for the night.
Yes, it's 1 degree above freezing in Milwaukee and yes, the doors for the president's campaign rally don't open for almost 24 hours.
But the sisters-in-law are Trump supporters and love attending his rallies, so they were the first in line behind barricades set up across the street from the UW-Milwaukee Panther Arena.
"Our husbands think we're nuts," said Linda Sorenson.
Are their husbands coming to the rally? "Noooooo," they said in unison.
Even though the doors open at 3 p.m. Tuesday, and light snow was in the forecast, a hearty group of Trump supporters decided to get in line the night before to make sure they get in and get a good spot, especially since it's general seating for the rally.
While tickets are free for Trump rallies, not everyone can get in since it's common for more tickets to be issued than space inside rally venues.
Linda Sorenson drove in from Waterford. This is her 10th Trump rally, her first was in West Allis during the 2016 presidential primary. The Sorensons booked a room at the Hyatt across the street and will take turns holding their place in line to go indoors to warm up and catch some sleep.
"It's fun to meet other people who love the president, or like him, as much as we do," said Linda Sorenson. "He's going out almost once a week to meet people. He's exciting. I've voted for other Republicans, but no one I wanted to come out to see."
They brought some cheese and meat sticks to snack on and will walk over to Major Goolsby's restaurant for dinner. The sisters-in-law waited eight hours to go to a rally in December 2016 at State Fair Park and waited 18½ hours, sleeping in their van, for a rally in Elkhart, Indiana, where residents pulled wagons filled with doughnuts to hand out to folks waiting in line.
"I really enjoy the atmosphere," said Elizabeth Sorenson.

Buy Photo
Rick Frazier, a retired pipefitter from Ohio, got into line for President Donald Trump's campaign rally almost 24 hours before doors open at the adjacent UW-Milwaukee Panther Arena. (Photo: Meg Jones, Milwaukee Journal Sentinel)
Rick Frazier drove from his home in New Bremen, Ohio, and parked his van at a lot across the street. He wore a knit Trump 2020 hat and was wrapped in a blanket. He also brought provisions — pudding, applesauce and oatmeal raisin cookies.
This will be his 18th Trump rally. He has traveled to 15 states for rallies.
"I'm a retired pipefitter and this is what I do," said Frazier, who has been to the last nine Trump rallies. "I'm going to take the next one off, the one in New Jersey."
He comes really early to be one of the first in the doors and stake out a standing spot toward the front of the stage. Once he gets his spot, he can sit down and wait, chatting with others next to him who will hold his spot when nature calls.
"I do it for the camaraderie. Not just to see the president but to meet like-minded people. Some have become lifelong friends," Frazier said. 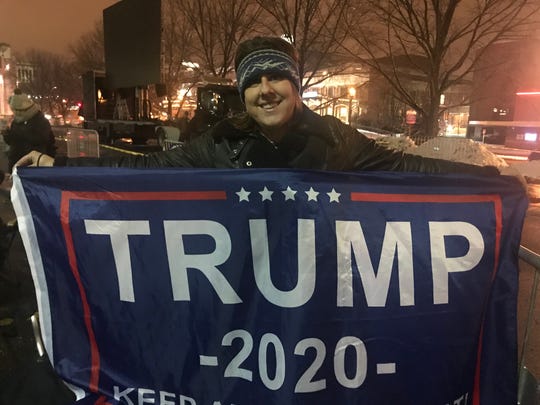 Buy Photo
Erica Smith of Chicago got into line for President Trump's campaign rally in the parking lot across from the UW-Milwaukee Panther Arena Monday night. (Photo: Meg Jones, Milwaukee Journal Sentinel)
Erica Smith of Chicago estimates she's been to around 40 Trump rallies including every one in Wisconsin. She booked a room at the Hyatt, too, and is taking turns waiting in line with other people she met, including the Sorensons.
"You meet a lot of cool people," said Smith. "Donald Trump brings us all together. We reunite every time we come together for a rally. I never would have imagined seeing so much of the country."
From: https://www.jsonline.com/story/news/2020/01/13/trump-milwaukee-rally-people-line-24-hours-ahead-speech/4461354002/
Posted by OrbsCorbs at 6:14 AM