NEXT STEP:  The committee will relay their recommendation to the City Council for a final vote, which should be:
Tuesday, January 21, 2020
at 7:00pm
in room 205 at City Hall.  Be there to hear discussion and ask questions.

QUICK SUMMARY:
Mason’s administration gave a lengthy breakdown of figures at the meeting, declaring that equipment replacement costs and personnel salaries would be too high.  (See attached city documents, with thanks to Ald. Carrie Glenn & Johnnie Cabb.) That information was refuted by one of the audience speakers, former Chairman of the Cable Commission Board in Racine, Chase Hendrix, who had been instrumental in CAR 25’s original set up.  Hendrix demonstrated that the city administrator’s figures were heavily overblown, and offered figures far below the city's cost estimates.  Hendrix generously volunteered his services to get the station running again.  With that information, and strong public support, the committee unanimously recommend funding.


The City Council nearly always follows committee recommendations and only heavy pressure from the Mason administration could seem to overturn that recommendation now.  Mason has shown a strong disregard for public opinion and might very well apply pressure to kill CAR 25/ Belle TV, which would hinder public oversight of their own government. 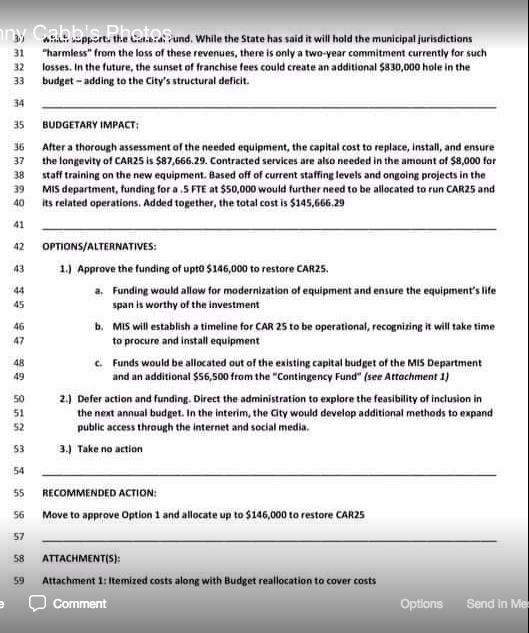 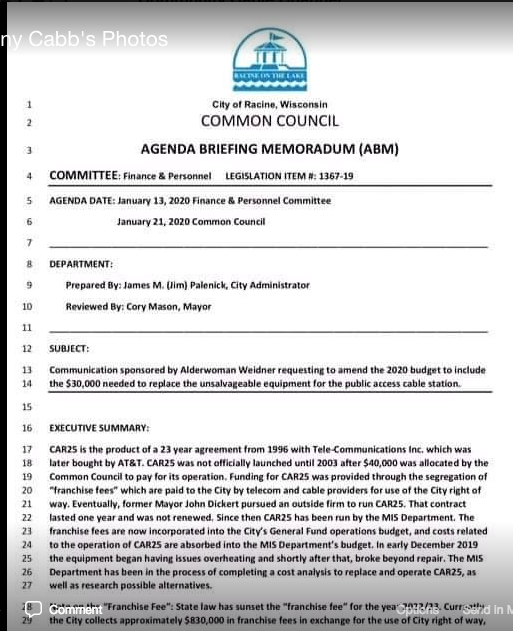 A VIDEO OF THE MEETING:

Posted by OrbsCorbs at 1:24 PM