The disconnect between the call for change and staunch support of police was evident Saturday in downtown Kenosha.
In Civic Park, a group of at least 400 people — many wearing variations of red, white and blue — rallied for Back the Blue.
Another group held signs proclaiming “We Back The People” and “I Can’t Breathe." Most were standing across the park on the steps of the county courthouse, but a handful positioned themselves combatively in the face of police officers, who stoically stood their ground.
Wild applause broke out within the Back the Blue crowd as former Milwaukee County Sheriff David Clarke picked up the megaphone to address the crowd. Clarke denigrated the nearby protestors.
"You know they barked up the wrong tree. They came here thinking their tactic of intimidation and bullying would scare us into not showing up here, but they got a very different response," Clarke says.
Clarke went on to say if he saw "one of ours under attack," he’s jumping into the fray.
Suddenly, a Black woman jumped on the stage with Clarke. She was shouting "Black Lives Matter."
The mood then shifted as if hit by lightning — the crowd began to shout "Blue Lives Matter."
"I did bring a pot and pan because I was going to be disruptive, but I took a step back. I’m not going to be a disrupter. I truly want to hear what they have to say," Little says. "I wish the counterprotests weren’t so volatile. It just creates division, we don’t need that right now. We need to come together."Kenosha-native Brian Little looked on, saying he can feel the hate in the air.
Little says without each side listening to the other and finding ways to compromise, standoffs like this will not end.
Read more: https://www.wuwm.com/post/back-blue-rally-met-black-lives-matter-protesters-kenosha
Posted by OrbsCorbs at 9:23 AM

A racial slur. Then the slice of a razor. Kenosha man believes he survived a hate-fueled murder attempt

From The Journal Times.com : DENEEN SMITH Lee Newspapers KENOSHA — There is a sound a razor makes when it opens up skin, Clevel... 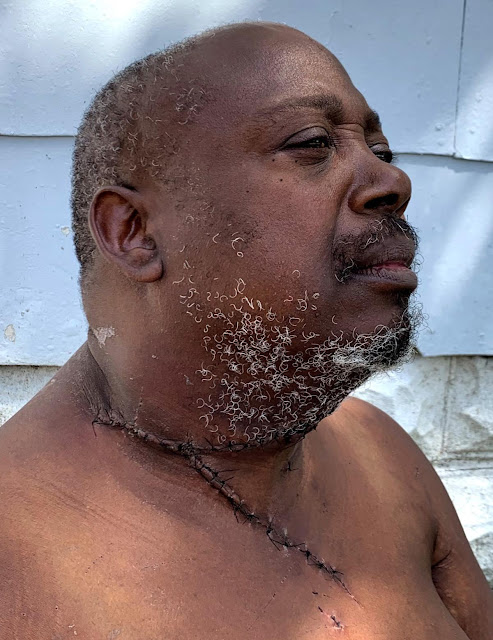