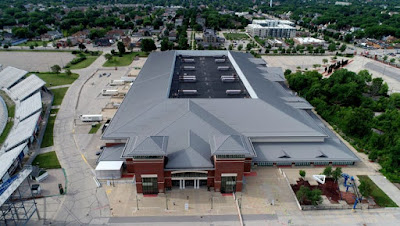 The field hospital built at a cost of more than $15 million on the state fairgrounds in West Allis to handle a potential overflow of COVID-19 patients was always likened to an insurance policy.
Known as an “alternative care facility,” the field hospital was built in roughly 10 days in early April by the U.S. Army Corps of Engineers when the pandemic was ravaging New York City and hospitals feared they would be overwhelmed by patients.
It was one of more than 30 set up throughout the country. Almost all of them were unneeded. Hospitals added beds and stopped doing elective procedures, freeing up additional beds. And stay-at-home orders slowed the spread of the virus.
That was the case in the Milwaukee area. But the field hospital at the Expo Center building still is seen as an insurance policy of sorts in case the state sees a surge in COVID-19 patients later this year.
“The Alternative Care Facility was built to serve the needs of the community not only in the beginning of the pandemic, but for future surges to come,” Ben Weston, a physician and medical director of the Milwaukee County/City/Municipality COVID-19 Unified Emergency Operations Center, said in an email.
“While we were fortunate to be able to maintain our health system capacity in the first phase of the pandemic, it is impossible to predict the future.”
For now, the state has no plans to decommission the field hospital, according to the Department of Administration. The 2020 Wisconsin State Fair, originally planned for early August, was canceled due to the pandemic.
The field hospital, designed for 530 beds, cost $14.9 million to build out, said Patrick Bray, chief of public affairs for the Chicago District of the U.S. Army Corps of Engineers.
That doesn't include the cost of equipment.
The State Emergency Operation Center still was determining the cost of equipping the field hospital, the Department of Administration said in an email. This is because many of the supplies were part of larger orders distributed throughout the state.
Read more: https://www.jsonline.com/story/money/business/health-care/2020/07/07/field-hospital-west-allis-has-yet-needed-but-remain-covid-19-coronavirus-wisconsin/5364610002/
Posted by OrbsCorbs at 9:53 AM