The world's methane emissions are at a record high, and burping cows are driving the rise

(CNN)Methane emissions are at their highest level ever, with agriculture and fossil fuels the biggest drivers, according to new research.
Climate models suggest that continued increases in methane levels could see global temperatures increase by 3-4 degrees Celsius by 2100, researchers from the Global Carbon Project said in a statement published Wednesday.
Researchers looked at methane emissions from 2000 to 2017, the last year for which complete global data are available, and warn that the current path leads toward a "dangerous temperature threshold," according to the statement.
Both natural disasters, such as wildfires, floods and droughts, and social disruptions, including mass migrations and famines, would become "almost commonplace," it said. 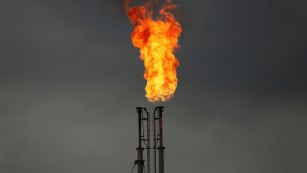 Oil and gas production is contributing even more to global warming than was thought, study finds
Methane is 28 times more effective than carbon dioxide at trapping heat over 100 years, the team said, and human activity accounts for more than half of methane emissions.
Annual emissions of the greenhouse gas have risen by 9% since 2000, which has the same effect on warming as adding 350 million cars to our roads.
The team, led by Rob Jackson, a professor of Earth system science in Stanford University's School of Earth, Energy & Environmental Sciences, published two papers in the journals Earth System Science Data and Environmental Research Letters on Wednesday.
The research showed that cattle ranching is the main reason for increased methane levels.
"Emissions from cattle and other ruminants are almost as large as those from the fossil fuel industry for methane," Jackson said. "People joke about burping cows without realizing how big the source really is."
Agriculture as a whole produces two-thirds of total emissions, with rice cultivation and biomass burning also significant contributors, according to the researchers.
Fossil fuels account for most of the remaining third, and the two sources have contributed almost equally to the recent increases.
Read more: https://www.cnn.com/2020/07/15/world/methane-emissions-record-scli-intl-scn/index.html
Posted by OrbsCorbs at 11:01 AM