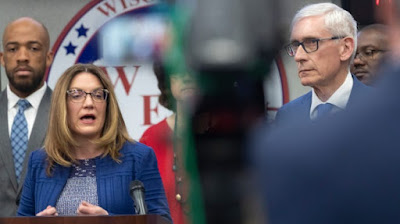 MADISON - The state health agency has shelved plans to post names of businesses and other places connected to at least two cases of the coronavirus after business groups and Republican lawmakers pushed back against the idea.
The Department of Health Services decided not to post information online about active investigations as early as this week after receiving feedback during and after a call with local health departments during which they conveyed their intention to do so.
But the agency also said requests for public records could push the agency to release the details anyway, sparking a debate between groups fearful such a list will erroneously label businesses as unsafe and public health officials' desire to help the public protect themselves from the virus.
The highest number of coronavirus-related investigations in Wisconsin are in facilities unrelated to health care, according to DHS data. As of Monday, DHS is conducting 361 investigations into workplaces and "other settings."
During the call with local health departments, DHS announced it would post names of businesses with outbreaks starting this week, according to an excerpt of an email from Bonnie Koenig, environmental health services provider at Public Health Madison & Dane County, obtained by the Milwaukee Journal Sentinel.
A spokeswoman for the Dane County health department also confirmed DHS discussed the plan on the call.
Read more: https://www.jsonline.com/story/news/politics/2020/07/07/wisconsin-shelves-plan-name-businesses-tied-coronavirus-cases-covid-19/5383647002/
Posted by OrbsCorbs at 9:30 AM