KENOSHA, Wis. - Authorities say a 19-year-old Kenosha woman accidentally shot someone while using the laser sight on a handgun to play with a cat.

The woman is facing a single charge of injury by negligent handling of a dangerous weapon. And as it turns out, the person was who was shot is also facing charges – out on bond and prohibited from having weapons in another case.

Law enforcement responded to the Kenosha apartment complex where the shooting happened on Tuesday, Aug. 10. There, they found a man, James Daniels, who was "bleeding from a single bullet hole" in the leg.

Authorities spoke with a witness who said she was in an apartment with Daniels and another woman. Daniels placed a "handgun on a dresser." The witness told police 19-year-old Jashanti Pleasant drank several shots of alcohol within an hour and picked up the gun. She turned the laser sight on and pointed it to the floor to get "a cat to chase it." The witness heard the gun go off, and Daniels went into another apartment to stop the bleeding.

The gun Daniels was shot with belonged to him, authorities said. They also found that the gun was loaded with one round in the chamber and six in the magazine. 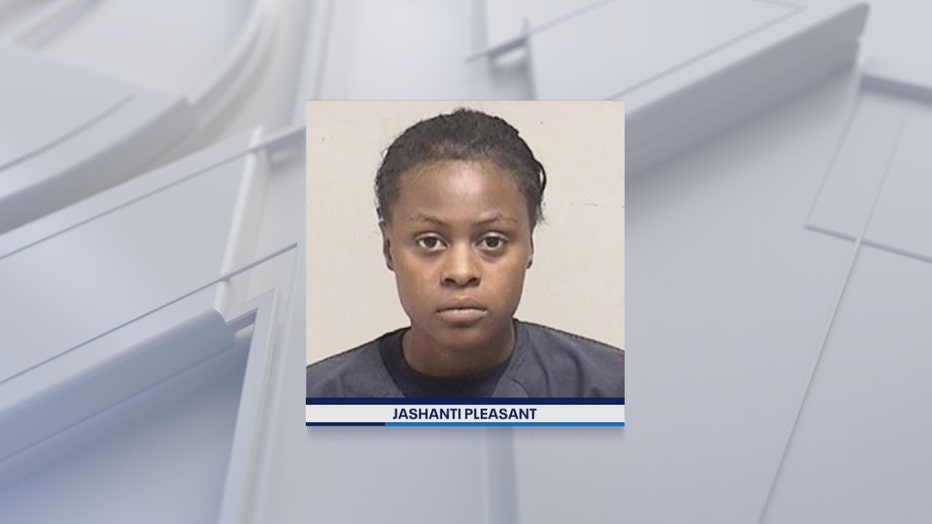 Prosecutors said Daniels was out on bond for nine counts of first-degree recklessly endangering safety while armed last June. He signed a bond that prohibits him from having any weapons.

Pleasant provided a statement to police, saying she was handling the gun when it "accidentally went off" and said she apologized to Daniels, who told her "it was OK."

Efforts to reach Pleasant's attorney were unsuccessful on Friday. She is out on a signature bond and due back in court in two weeks for a preliminary hearing.

Posted by OrbsCorbs at 3:49 AM