Your Wife, and current City of Racine Municipal Judge Rebecca Mason intervened on behalf of Monte Osterman's "non-profit" Root River Council to defend his failure to comply with IRS requirements and provide the public with form 990's, thus obstructing the free flow of information on how Monte Osterman spent taxpayer dollars he obtained through government grants - most of which were obtained through government agencies on which either Racine Mayor John Dickert was a Board member or which former Racine area homebuilder  Cathy Stepp was the head of.

Those agencies - specifically the DNR and Wisconsin Coastal Management Program had been provided with information stating that Monte Osterman was operating a legitimate non-profit organization in compliance with IRS regulations. The failure by Monte Osterman to provide form 990's when requested suggests otherwise - that the Root River Council was being operated as a SCAM and that the public was obstructed from obtaining and viewing information concerning how tax dollars via grants were spent.

Mayor Mason - I allege that your wife, Rebecca, defended the indefensible and assisted in a cover-up of Monte Osterman's failure to comply with IRS Regulations.


Our request to see the IRS required form 990's has never been complied with - and while taxpayers have thrown millions of dollars at Machinery Row - the only results so far is to have thrown former property tax paying Residents and Businesses off of their property; compensate some, but not all for relocation costs (including Racine County Supervisor Monte Osterman), create massive tax shifting via another TID; enrich Rodney Blackwell who may have extorted additional monies from Sellers; left the RDA underfunded and forced them to borrow funds from the City; and 2 pending lawsuits against the City of Racine, one in Circuit Court, one in Federal Curt, which Residents will pay dearly for.
How do you respond? 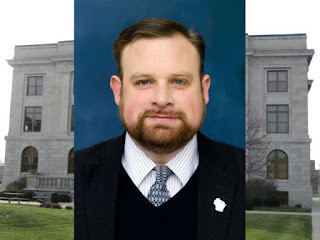 Posted by Clint Teeters at 4:41 PM

Commenter SHIELD has it partially right - just change IGNORANCE to MALFEASANCE! (and I believe that the Repubs are worse than the Democrats)

City taxpayers are going to pay for the inept democrats again... they do things because they feel they can...another time after time attempts by dem's to govern...They do not Know how...and Mason is in way over his head...he had a job where he had to do NOTHING...just show up and make the scripted liberal talking points..." need more revenue"...which is more TAXES...more fees....Blame game..."it racist" "need training" get another "assistant"...spread the blame run gov't... More "free stuff" given out... this is going to cost big time..I see a HUGE settlement...this will not go to a jury...it would expose such ignorance it would be devastating...