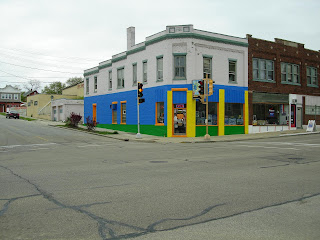 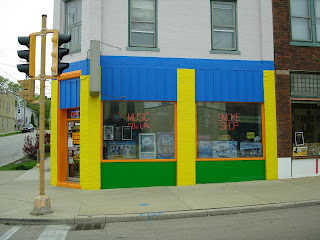 Have you noticed the little head shop on the northwest corner of Hamilton and North Main Streets? If you haven't in the past, you probably will now. See the pictures at right.

The store is called Cosmic Corner (http://www.cosmiccorner.com/) and it has been there for at least a couple of years, maybe more. I really don't know. The store manager is the same one who ran the old Mainstream Music downtown. They seem to be thriving in their present location.

A couple of weeks ago, I noticed their new colors. It's hard not to. The store used to be painted the same color as the upper level. Someone else noticed, too. Now there is a petition in the store that states "We support Cosmic Corner's new colors" for customers to sign. When I asked about the petition, I was told that the city has scheduled a meeting with the store owner because of objections to the colors. I expressed surprise that the city could tell a private business what color to paint itself. I was then told, "Even though we're not downtown, I guess we're part of that 'downtown thingy' and we need their permission."

That's all I know. I'll admit this is not exactly a piece of investigative journalism. I'm not a journalist. I don't know who objected to the colors, but I assume it's another of Racine's nanny-nazis, like the ones who chased BrewFest out of Festival Hall and want to make smoking and farting in the open air a criminal act. I rest so much better at night knowing that these divine arbiters of all are busy telling everyone else how to live their lives.
Posted by OrbsCorbs at 2:25 AM

Email ThisBlogThis!Share to TwitterShare to FacebookShare to Pinterest
Labels: Best of Racine, politics

Psst, Journal Times, there might be a story here.

I find It amusing the the UGLY Stop and Go light doesn't have paint on the bottom of the pole. I sure am glad I don't live In Racine anymore. I think It just might piss me off more than here.

Uh-oh, I just noticed that the barbershop next door is painted red, white, and blue. He's probably gonna catch hell, too.

Toad, it was also pointed out to me that the previous paint on the store (which can still be seen on the upper level) was faded, flaking, and peeling off.

If the covenant or whatever you call it truly exists and it covers them, then I don't see where they have much chance. I assume an exemption could be granted, but given the nature of the business, I doubt it would be. As I understand it, the old Mainstream was made to feel less than welcome downtown. The powers-that-be would probably be happier if Cosmic Corner didn't exist, too.

I dunno. Does it add to or detract from the property values of the neighborhood, or neither? Is it an "eyesore"? Who decides what that is? Is it art? Who decides what that is? Is it smart advertising? I can see just about every imaginable argument on this one. But I'm a big believer in individual freedoms and rights AND responsibilities. Just because you don't like the way something looks, that doesn't give you, or anyone, the right to prohibit it. There are way too many Snooty McSnoots in Racine for such a small town, but obviously enough for the small mindedness.

Dairy Queen on Hy-20 out by Case High School, they painted their building and were told they have to repaint it, it didn’t “blend” with the rest of the business!

Their business picked up something like 25 to 30% after the paint job, it stood out so people could notice it. They told (I think) Mount Pleasant they not changing it!

Maybe they should sell hotdogs...

I go to that DQ specifically because of that paint job and the crap they got for it. The one on Durand is 1/4 the distance to drive to. Now I gotta go to a head shop just to sign their petition. Christ they'll probably force me to buy some ZigZags or screens or something.

Watch out, Huck. They'll lure you in with their wiles!

Actually, there is an incredible assortment of wares in the store. If you click the link to their site, there is slide show showing the interior of the store. It is packed from top to bottom. Even old 60's posters. Right on! Far out! Fight the power! Hang some of that tie-dyed on the wall, hang some of those beads between rooms, put on some Hendrix, light some incense, and you're back on Haight-Ashbury, man

I've gone inside the store a few times, mostly to check out the vinyl they sell there. However exorbitantly priced, I've come across rare albums from bands like Babe Ruth there. I've been offered to sell my vinyl collection (which I'll never sell) to the owner.

It's a decent store, kinda like I would image to have. The black velvet posters and such. But, I'm not to keen on the idea of what's being sold in the back of the store, especially after giving up that lifestyle years ago.

I think it looks great. Apparently Racine has nothing better to worry about? I'll have to make a point to check this place out the next time we are there.

I go there; they have a great selection of incense

I have to admit. The more I look at It, the more I like It. I always liked Mainstream Records also. I think that whole intersection, and all of the business should alter the buildings to resemble the kind of genre of the business. George's could come up with some great Jazz colors etc. They could CREATE jobs by making the area a special tourist area, slightly separate from downtown proper. Everything you need Is located In walking distance. Your City Fathers have BLINDERS on. When REAL opportunity knocks they are blind.

I think if the person owns the store they have the right to paint the building the way they want to. I think it don't look that bad I kinda like it. People should just leave him alone and let him paint it the way he wants to.

with all the businesses OUT OF BUSINESS, you'd think they wouldn't pick on the ones IN business, and they want to make open air farting illegal, geez, when will it end??? :)

i think the colors are magnificent!
and because of your post orbs i went in there today for the first time - mainly to sign the petition of course but i also ended up buying the most beautiful purse...

I nominate Orbs as the head of our marketing dept. when we get the island.

I spoke with the owner last night. The city declined their paint job and have to repaint.