The greatest worry about the Foxconn deal is that it’s being negotiated by leaders without an ounce of relevant experience and with an atrocious track record in managing the state’s economy. 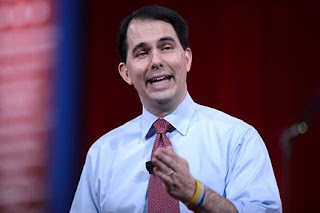 Wisconsin Republicans are trumpeting Foxconn’s stated interest in building a massive flat-screen-display manufacturing facility in the state. They say it’s a once-in-a-generation opportunity to transform the state’s economy.

Perhaps. But between Scott Walker’s history and Foxconn’s, we have many reasons to sound the alarm about taxpayers funding a $3 billion incentive package.

The greatest worry about the Foxconn deal is that it’s being negotiated by leaders without an ounce of relevant experience and with an atrocious track record in managing the state’s economy.

Walker and Assembly Speaker Robin Vos epitomize crony career politicians. Between them, they have virtually no business experience — unless you count Vos’ brief stint as owner of RoJo’s Popcorn.

The pitfalls of Walker’s Foxconn deal are more than merely speculative. The non-partisan Legislative Fiscal Bureau made a thorough study of the deal and found that Wisconsin will not receive a return on its investment until about 2042. But Walker’s interested in the political boost he hopes to get from the project right now, and he’s not about to let economic forecasts from experts get in his way. He’s treating the study just as he does climate science and every other inconvenient truth he encounters.

The bureau is not the first entity to cast doubts on the deal.  A report compiled by the Wisconsin Budget Project found that if Foxconn created 3,000 jobs — the minimum number it’s promising — each one would cost Wisconsin taxpayers as much as $587,00 under the terms of Walker’s proposal.

Walker’s financial blunderings are legendary. His jobs agency — the Wisconsin Economic Development Corporation — is an epic disaster by any standards, tainted with cronyism, corruption, lack of accountability, incompetent recordkeeping and, of course, failure to create jobs. His management of the state’s economy — essentially implementing austerity to cut taxes for the wealthy — has lowered our standard of living, run up debt to be dealt with in future budgets, left our transportation infrastructure in shambles, and created the nation’s fastest-shrinking middle class.

And let’s not forget Walker’s monumental inability to manage his campaign budget during his brief, failed bid for the Republican presidential nomination. Or even to handle his personal finances.

We wouldn’t trust Walker with our own checkbooks, so why hand him $3 billion to manage a complex, multinational business negotiation?

But the deal that Walker wants to make with the Taiwanese company is alarming in other ways. It allows for limitless, irreparable environmental destruction. And the fourth-largest incentive deal in U.S. history — which The New York Times labeled a “lavish lure” — is being offered to a company with a long history of failing to follow through on its promises, not to mention treat its workers with dignity.

In addition, what are we to make of the philosophical turnaround by the state’s GOP?

Due to their strict adherence to “free-market” principles, Walker, Vos and their gang have in the past opposed projects that could have transformed the state’s economy — and opposed them specifically because they relied on government funding. But the Foxconn project that they’re lauding would cost state taxpayers an estimated $3 billion at a time when we can’t afford to fix our roads.

Even the Koch-backed group Americans for Prosperity has come out against Walker’s proposed deal.

Either Wisconsin’s Republican leaders are hypocrites or they’ve been lying all along about their belief that government involvement in the marketplace is toxic and doomed to failure.

Finally, it’s reasonable to suspect that next year’s elections, including Walker’s bid for a third term, are playing a role in the GOP’s abrupt change of heart about government involvement in economic development. Walker promised to create 250,000 jobs during his first term as governor, and he urged voters to hold him to that pledge. Now, halfway through his second term, he still hasn’t come close.

Walker’s over-the-top Foxconn maneuver before the next election could well reflect his desperation to deliver something — anything, and at any cost —to allow him to don the mantle of “job creator” that has eluded him for so long.

Posted by OrbsCorbs at 8:30 AM

The problem with Numbers is that they are all different - and infinite.....