Several children were among at least 22 shot over another violent Chicago weekend which left four people dead - numbers which were lower from the prior weekend of the 10th-11th which saw at at least 39 shot. This weekend's violence included an 11-year old boy struck in the leg by a bullet in the living room while playing alongside his siblings, as well as a 16-year old shot inside a car, and a 17-year old girl wounded while outside with friends.

Ahead of the upcoming Halloween weekend at the end of the month - which in past years has seen spikes in gun violence - the city is bracing for a greatly reduced police force patrolling the streets after the city's controversial vaccine mandate for police officers took effect Friday night (with the midnight deadline to upload vaccination status to an online portal), which many have said they will ignore. ABC7 Chicago writes that tensions between the police union and the city continue to escalate: "While no officers were taken off the streets this weekend and the standoff has now reached the courts with both sides suing each other."

Previously, Fraternal Order of Police President John Catanzara (who's now been issued a gag order) said he believes up to half of the entire Chicago police department are ready to not comply with the vaccine mandate, with city officials also bracing for a potential huge loss of personnel, given the latest order that's gone out across the CPD is the restriction of time off, which typically only happens ahead of July 4th - or other weekends expected to bring surges in violent crime.

According to the latest reports:

Days off are being cancelled and any time-off will require approval from a deputy chief or above, according to a new memo from First Deputy Supt. Eric Carter. The memo is being read at all roll calls for the next five days.

"Until further notice: The use of elective time off by all sworn CPD members is restricted," the memo says.

Also on Sunday the CPD issued another memo calling for vaccine compliance, but this time expressly stating that the city is prepared to fire or discipline officers found "disobeying a direct order".

The contents of the memo, obtained by local media, includes the following:

"TO BE READ AT ALL ROLL CALLS FOR SEVEN (7) CONSECUTIVE DAYS. This AMC message informs Department members of consequences of disobeying a direct order to comply with the City of Chicago's Vaccination Policy issued 8 October 2021 and being the subject of the resulting disciplinary investigation. A Department member, civilian or sworn, who disobeys a direct order by a supervisor to comply with the City of Chicago's Vaccination Police issued 8 October 2021 will become the subject of a disciplinary investigation that could result in a penalty up to and including separation from the Chicago Police Department. Furthermore, sworn members who retire while under disciplinary investigations may be denied retirement credentials. Any questions concerning this AMC message may be directed to the Legal Affairs Division via e-mail," the memo said.

The memo was issued just after 8pm Sunday evening, with the police union quickly responding in a widely circulated social media post: 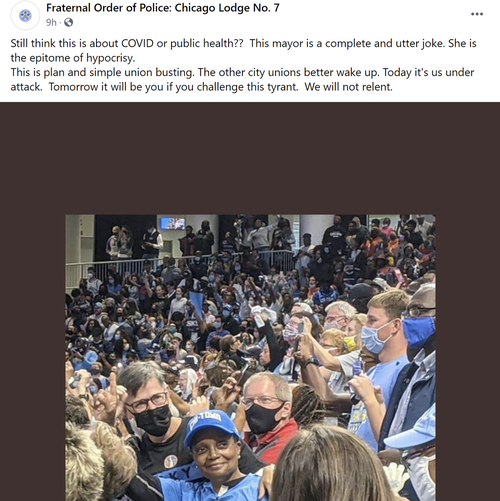 "Still think this is about COVID or public health?? This mayor is a complete and utter joke. She is the epitome of hypocrisy. This is plan and simple union busting. The other city unions better wake up. Today it's us under attack. Tomorrow it will be you if you challenge this tyrant. We will not relent," the Facebook post said.The police union featured a recent photo of Mayor Lori Lightfoot at the Chicago Sky game, posing maskless amid a huge crowd of tightly packed people.

Posted by Clint Teeters at 2:28 AM