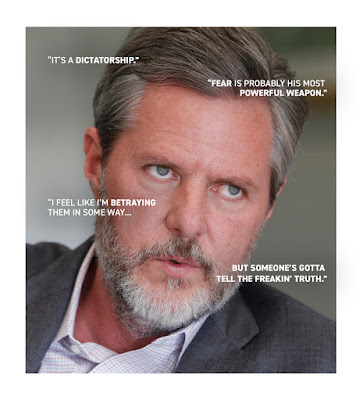 At Liberty University, all anyone can talk about is Jerry Falwell Jr. Just not in public.
“When he does stupid stuff, people will mention it to others they consider confidants and not keep it totally secret,” a trusted adviser to Falwell, the school’s president and chancellor, told me. “But they won’t rat him out.”

Over the past year, Falwell, a prominent evangelical leader and supporter of President Donald Trump, has come under increasing scrutiny. News outlets have reported on business deals by Liberty University benefiting Falwell’s friends. Trump’s former personal attorney Michael Cohen claimed that he had helped Falwell clean up racy “personal” photographs.

Based on scores of new interviews and documents obtained for this article, concerns about Falwell’s behavior go well beyond that—and it’s causing longtime, loyal Liberty University officials to rapidly lose faith in him.

More than two dozen current and former high-ranking Liberty University officials and close associates of Falwell spoke to me or provided documents for this article, opening up—for the first time at an institution so intimately associated with the Falwell family—about what they’ve experienced and why they don’t think he’s the right man to lead Liberty University or serve as a figurehead in the Christian conservative movement.

In interviews over the past eight months, they depicted how Falwell and his wife, Becki, consolidated power at Liberty University and how Falwell presides over a culture of self-dealing, directing university resources into projects and real estate deals in which his friends and family have stood to make personal financial gains. Among the previously unreported revelations are Falwell’s decision to hire his son Trey’s company to manage a shopping center owned by the university, Falwell’s advocacy for loans given by the university to his friends, and Falwell’s awarding university contracts to businesses owned by his friends.

“We’re not a school; we’re a real estate hedge fund,” said a senior university official with inside knowledge of Liberty’s finances. “We’re not educating; we’re buying real estate every year and taking students’ money to do it.”

Liberty employees detailed other instances of Falwell’s behavior that they see as falling short of the standard of conduct they expect from conservative Christian leaders, from partying at nightclubs, to graphically discussing his sex life with employees, to electioneering that makes uneasy even those who fondly remember the heyday of the late Rev. Jerry Falwell Sr., the school’s founder and Falwell Jr.’s father, and his Moral Majority.

In January, the Wall Street Journal reported that in the run-up to Trump’s presidential campaign, Cohen hired John Gauger, a Liberty University employee who runs a private consulting firm, to manipulate online polls in Trump’s favor. Not previously reported is the fact that, according to a half-dozen high-level Liberty University sources, when Gauger traveled to New York to collect payment from Cohen, he was joined by Trey Falwell, a vice president at Liberty. During that trip, Trey posted a now-deleted photo to Instagram of around $12,000 in cash spread on a hotel bed, raising questions about his knowledge of Gauger’s poll-rigging work. Trey did not respond to requests for comment.

Posted by OrbsCorbs at 7:11 AM