NIH has upgraded their recommen­da­tion and now considers Ivermectin an option for use in COVID-19.

Which we knew likely worked starting in March.

Which we knew on the strength of scientific evidence THIS SUMMER.

Which, unlike masks, is an effective prophylaxis -- we knew that by the middle to late summer and into the fall.

WHICH WE KNEW BY EARLY FALL WAS AS EFFECTIVE IN PROPHYLAXIS AS A VACCINE YET WAS AVAILABLE RIGHT NOW, WAS APPROXIMATELY AS EXPENSIVE AS ASPIRIN AND HAD 30+ YEARS OF TESTING AND DATA BEHIND IT FOR SAFETY.

In addition unlike a vaccine which requires six to eight weeks for antibodies to build this is effective immediately and thus if given to all persons in a household when one got sick would cut off transmission and end the outbreak in one week, as I previously pointed out.

Which we did not use, intentionally, to "protect" the EUA process on said vaccines, because it is illegal to issue an EUA if there is a safe and effective alternative.

Which, in conclusion, is directly responsible for more than half of the total death count and about 3/4 of it in my county.

And by the way, since there is no profit in this drug it is the direct responsibility of public health agencies such as the NIH to fund and conduct studies on potential therapies of this sort since nobody has a financial incentive to do so.  They intentionally did not and for this they should be disbanded and the "scientists" at same, including Fauci, should be criminally prosecuted.

I've been reporting on this since it started.

I appeared three times in sequence to point out the bull**** of "mask orders" in our county before our County Commission and have sent multiple letters to both commissioners and our Mayor.  All have been ignored and now the NIH confirms I was and am right.

And shove your (and their) worthless masks up THEIR asses. 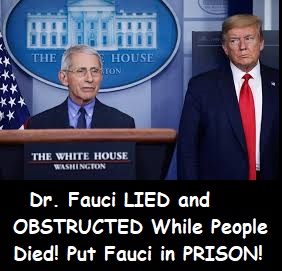 Posted by Clint Teeters at 6:10 AM

So when will Ratcine McMayor Cory 'Butterball" Mason, his lying Mad Scientist Brother who turned the area in City Hall once reserved for "Toys for Tots" into Dr. Frankensteins Lab and Control Freak Da' Bowersox gonna go to Prison for killing Ratcine Business and Residents?

Orbs - skip the idiot and dangerous vaccine and go for the Ivermectin.

herein known as the Fauci Fraud