KENOSHA, Wis. (CBS) — No police officers will be charged by the Kenosha County District Attorney’s office in the shooting of Jacob Blake in Kenosha, Wisconsin this summer.

Kenosha County District Attorney Michael Graveley announced the decision on Tuesday afternoon. He also said there will be no charges against Blake himself.

On Aug. 23, Kenosha police Officer Rusten Sheskey, who is white, shot Blake, 29, who is Black, seven times. Blake was left paralyzed from the waist down.

Graveley went into great detail as to why he made the decision – emphasizing that a prosecutor must build a case that can be proven beyond a reasonable doubt in court, and if prosecutors cannot do so, they cannot bring charges.

Graveley focused in particular on the issue of self-defense, noting that uniformed officers were called to the scene on a designated domestic abuse call and knew there were arrest warrants for Blake. He said the question was whether Sheskey reasonably believed shooting at Blake was necessary to prevent being stabbed by Blake or to prevent someone else from imminent danger – and if charges were brought, then the District Attorney would have to prove Sheskey did not reasonably believe such a thing.

Graveley said in Wisconsin, the burden of proof is on the state to prove an officer was not acting in self-defense, and he was not confident he could prove that case.

He added that he cannot bring charges to send a message about the misuse of force by police, to advance the cause of racial equity, or because the Blake family has suffered and needs healing – because while all are noble causes, they cannot legally be used as grounds to bring charges. 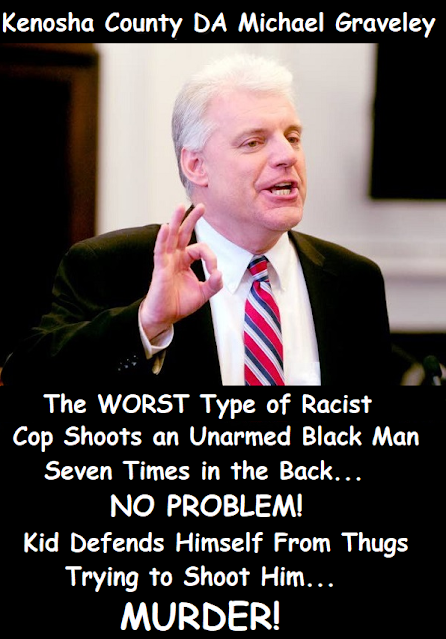 Posted by Clint Teeters at 6:50 PM

Sick! Sick! Sick! Cops get away with blatant murder every single day - but if a citizen tries to protect their person from harm - MURDER! What warped values - no wonder SE WI is a shithole.

And in Ratcine, small Business which pays the taxes isn't essential, but a LGBT Liason, Spokesperson, and unnecessary Mayor is!

Gotta wonder what the Cops at KPD got on Graveley - must be good and juicy.

"Sheskey and another officer at the scene told investigators that as Blake attempted to get into the vehicle and Sheskey grabbed his shirt, Blake began to twist his body toward the officer, a knife in his hand. That is when Sheskey fired his weapon seven times, striking Blake four times in his back and three times in his side. Graveley said in the video, the view of whether Blake is turning toward police is blocked by the vehicle’s door and the second officer".

The police shooting of Michael Bell was wrong. Police had no lawful reason to stop Michael Bell’s vehicle, and in so doing, violated not only the law but also their own Policies and Procedures. The Kenosha Police Department gave sworn statements to justify their conduct that are unsupported by the physical evidence. Numerous armed officers were present when they pinned an unarmed Michael against a vehicle in his driveway and fatally shot him in the head. The links at left demonstrate that the Kenosha Police Department unnecessarily and wrongfully killed Michael Bell.

"In making his decision, Graveley said he had to weigh several factors, but most of all he had to determine what could be proven in court. He said he did not feel he could prove that Sheskey did not have the “privilege of self-defense” in his decision to shoot Blake".

So how come that dumb kid, Rittenhouse (shouldn't have been there in the first place) doesn't get the privilege of self defense?

KPD definitely has something BIG on Graveley!