It is, of course, merely another permutation of the Sino-Jewish War:

No American pro sports league has profited more from its business relationship with China than the NBA, and the NBA has been known to take some serious social justice and political stands in the United States.

So it will be interesting to see if the league will take a stand against its biggest business partner, now that a Chinese court has ruled in favor of a widely circulated Chinese textbook that describes homosexuality as “a psychological disorder.”

Remember, the NBA is the same organization that once pulled its All-Star Game out of Charlotte after a North Carolina law banned transgender people from using bathrooms in accordance with their gender identities.

Now, will the league speak out about the Chinese court ruling that states referring to homosexuality as a mental disorder is a-OK? Will it pull preseason games out of China, stop accepting money from Chinese merchandise sales, vehemently speak out about the communist nation’s decision to promote materials that are clearly anti-LGBT?

The point is not the hypocrisy. The point is that the Chinese response demonstrates it was never necessary to surrender to the neoclowns and SJWs. Unfortunately, the prosperity-weakened Christians of the West lacked the spine and the intelligence to defend their ideals, their nations, or their faith, and succumbed to lies about free speech, equality, posterity, and civic nationalism.

Which is why the 21st Century is much more likely to belong to the East than to the West. 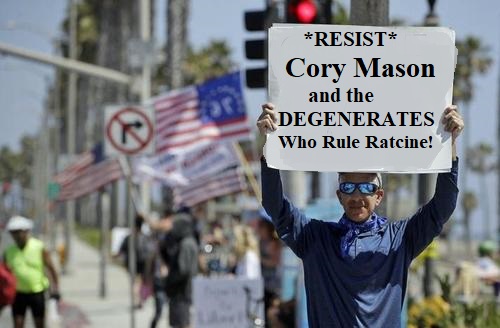 Posted by Clint Teeters at 9:08 AM

From Racine County Eye : by   Emma Widmar RACINE – A former volunteer wrestling coach at  Horlick High School  has been charged by the Raci...