MOUNT PLEASANT, Wis. - An altercation at a Mount Pleasant bar led to chaos when police said a 33-year-old woman rammed her car into a group of people, trapping one man underneath.

Antonio DeLeon's siblings told FOX6 News he had plans to move to Memphis, Tenn. on Sunday, March 7 -- and celebrated with a going-away party Saturday night. Instead, the 35-year-old is in the hospital, facing multiple surgeries after he was run over by a car.

Around 2 a.m. Sunday near 22nd and Racine, Mount Pleasant police arrived at On the Level Lounge, where a vehicle had driven through a group of people leaving the bar.

Family members said DeLeon, known to friends as Tony, was trapped under the car.

"Everybody knows Tony," said Angela James-Canon, DeLeon's sister. "He's the life of everything. He's funny. He was having a going-away party because he was supposed to leave Wisconsin to come start a life in Memphis, Tennessee." 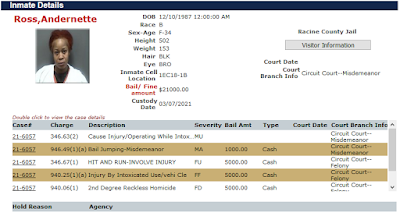 Posted by Clint Teeters at 5:54 AM