RACINE COUNTY, Wis. - A 30-year-old woman was transported via Flight for Life to Froedtert Memorial Hospital with severe injuries on Sunday, Aug. 22 following a wrong-way head-on collision. It happened on northbound I-94 in Racine County.

According to the Racine County Sheriff's Office, around 7:40 p.m. deputies responded to a report of a red vehicle going southbound in the northbound lanes of I-94. While multiple deputies were en-route to this incident, the Racine County Communications Center was notified that a head-on collision had occurred involving the wrong-way driver at mile marker 335 just prior to the HWY 11 off-ramp. 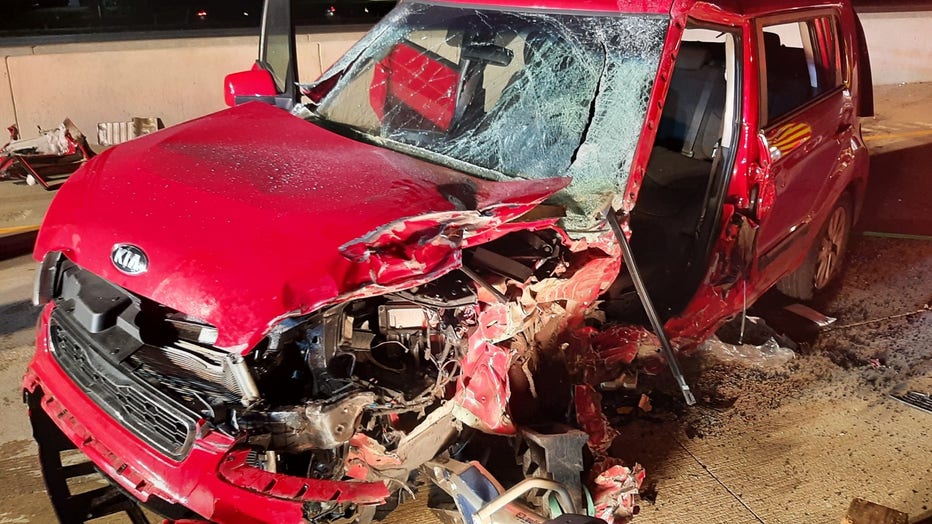 When deputies arrived, they observed the wrong-way driver in a Red Kia Soul with extensive damage, and the single operator was entrapped in the vehicle. The operator of the vehicle, a 30-year-old woman from Waukegan, Illinois, sustained severe injuries and required extrication from her vehicle. She told emergency responders she was on her way home from work when she got into this crash despite both living, and working, in Waukegan, Illinois.

Due to the extensive rescue operation and debris from the accident, all northbound lanes of I-94 were closed at CTH KR for nearly three hours.

"You really have to make an effort to get back up on the interstate and travel the wrong direction. So, that in and of itself is very concerning to me," said Sheriff Christopher Schmaling.

This accident is still under investigation, but alcohol is believed to be a contributing factor to the accident.

So far this year in Racine County, the sheriff’s office has made 338 OWI arrests. The most recent one came last night after a wrong-way driver struck a car on I-94.

"These types of calls never end well," the sheriff said. "We were fortunate, I would say this group of individuals that she struck, there were four people as you mentioned in that vehicle, including a dog, two of which are reporting no injuries – the dog is healthy and fine.  And there were two that reported minor injuries."

At this time, officials aren't sure how the wrong-way driver got onto the interstate going the wrong way – but points to her possibly altered state of mind as a contributing factor.

The sheriff says their investigation now turns to the driver and figuring out why this happened.

The sheriff tells me they have requested a warrant to obtain a blood sample of the wrong-way driver and are recommending charges of OWI second offense causing injury — which is a felony.