Bice: AT&T has been improperly charging stadium tax to some customers over last four months 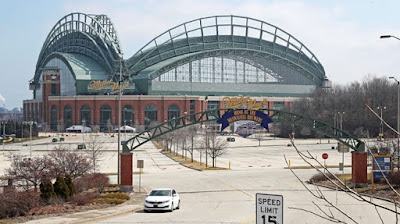 It's the tax that won't die.
Members of the board for the Southeast Wisconsin Professional Baseball Park District — the landlord for the Milwaukee Brewers' retractable roof dome stadium — voted unanimously to end the 0.1% stadium tax in March.
But then the controversial tax generated an unexpected — and unwanted — $4.3 million surplus that took months before officials concluded they should return the money to the five-county region where it was levied.
Now a number of local AT&T customers are complaining that they are still being hit with the stadium tax months after it ended.
"Unable to get an explanation as to why AT&T is still charging .1% stadium tax on phone bills if tax ended in March," wrote Margaret Cortez in an email. "Charge appears on April, May, June and now July."
"I called AT&T and told them that that tax was no longer being collected as of April 1, 2020," chimed in Mary Jerominski of Cedarburg. "After being transferred a few times and put on hold, I was finally told that AT&T had 'nothing to do with that tax.'"
But, in fact, AT&T does have something to do with it. The company, it turns out, has been charging the stadium tax in error to some customers for the past four months.
The company admitted the mistake this week.
"We are working to resolve a billing system problem which prevented us from removing the tax for a small number of customers," said Jim Kimberly, a spokesman for AT&T. "We will fix it and automatically apply refunds to affected customer accounts."
The tax has long been a lightning rod for criticism, having taken several votes by the Senate to win approval and costing one lawmaker his political career.
But that criticism has lessened over time as Miller Park was becoming a popular summertime destination in southeastern Wisconsin.
Over the years, more than $600 million in taxes have been collected to pay for the construction of Miller Park and the district’s ongoing financial obligations to operate it. Since 2001, the Brewers have paid $19.8 million in rent to the district and another $106.8 million to maintain and enhance the ballpark.
Last month, Miller Park district officials disclosed that the tax had generated a $4.3 million surplus that they were left sitting on. They offered to return the money to the state, but the state initially turned them down.
Weeks later, the state reversed course and agreed to take back the surplus funds, concluding they would return it to the five counties where the tax was charged. The tax, which started 23 years ago, had been in effect in Milwaukee, Ozaukee, Washington, Waukesha and Racine counties.
Now it turns out that AT&T has continued the tax for some of its customers.
Jerominski, the Cedarburg customer, said she realizes the tax is not huge. But she said that is not the point.
"Pennies add up. I'd gladly accept whatever AT&T has collected in stadium tax from five counties over three months," she said. "Bet that's not pennies!"
Contact Daniel Bice at (414) 224-2135 or dbice@jrn.com. Follow him on Twitter @DanielBice or on Facebook at fb.me/daniel.bice.
From:https://www.jsonline.com/story/news/investigations/daniel-bice/2020/07/24/at-t-has-been-improperly-charging-miller-park-stadium-tax-customers/5493579002/
Posted by OrbsCorbs at 7:51 AM

An illustration shows vials of a COVID-19 vaccine and syringes with the logos of US pharmaceutical company Pfizer and German partner BioNTec...