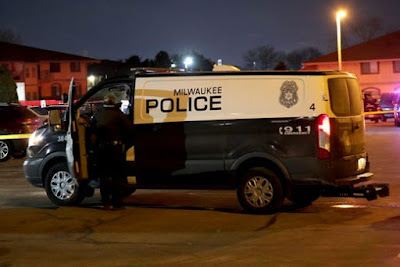 A 4-year-old boy died from a gunshot wound early Saturday morning on the city's northwest side, Milwaukee police said.
Police responded to a report of a shooting at 1:17 a.m. in the 5300 block of North Lovers Lane Road and found the child suffering from a serious gunshot wound.
Officers started CPR and members of the Wauwatosa Fire Department attempted advanced life saving measures, but the boy died, police said in a news release.
Police said no arrests have been made and the circumstances leading up to the shooting are under investigation.
Anyone with information is urged to contact the Milwaukee Police Department at (414) 935-7360 or contact Milwaukee Crime Stoppers at (414) 224-8477.
The boy's death is the latest in which shootings have claimed the life of a child in Milwaukee.
Ten-year-old Sierra Guyton died July 13, 2014, almost two months after being shot in the head while playing on the playground at Clarke Street Elementary School, 2816 W. Clarke St. She was caught in the crossfire between two gunmen who exchanged 16 shots with 50 children nearby.
Five-year-old Laylah Petersen was sitting on her grandfather's lap in his house near North 58th Street and West Fairmount Avenue on Nov. 6, 2014, when bullets fired outside the house struck her.
Bill Thao, 13 months, was playing on the floor of a relative's home near North 73rd Street and West Mill Road on Dec. 27, 2014, when a barrage of 41 bullets fired by three gunmen in the street hit the building.
Nine-year-old Za'Layia Jenkins died May 11, 2016, 11 days after she was shot inside a relative's home in the 1500 block of West Meinecke Ave. Three men fired the shots after other residents chastised them about drug dealing on their block.
Fifteen-year-old Melanie Johnson was struck inside her home near North 35th Street and West Silver Spring Drive after gunfire erupted outside the house Dec. 12, 2016.
Six-year-old Justin Evans Jr. was shot July 22, 2017, in his grandmother's yard in the 3600 block of North 23rd Street. He was the youngest victim to die by gunfire that year.
Thirteen-year-old Sandra Parks was hit by a bullet shot outside her house that struck her in her bedroom Nov. 19. 2018.
Three-year-old Brooklyn Harris shot and killed inside a car during a road rage incident July 13, 2019, near North 42nd Street and West Concordia Avenue.
RELATED: Grieving after a death? Here’s a list of organizations you can turn to for support.
RELATED: Lost someone to homicide or want to help someone who has? Here’s a list of organizations making a difference in Milwaukee.
MILWAUKEE HOMICIDES: The Journal Sentinel is tracking homicides to memorialize victims and better understand deadly violence.

Our subscribers make this reporting possible. Please consider supporting local journalism by subscribing to the Journal Sentinel at jsonline.com/deal.
DOWNLOAD THE APP: Get the latest news, sports and more