The life and legend of Milwaukee’s favorite beach bum
BY MATTHEW J. PRIGGE 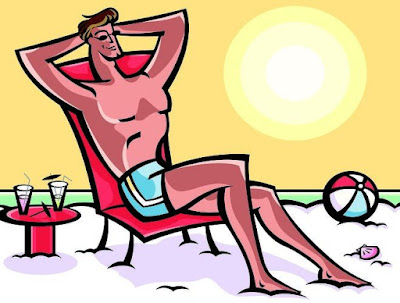 It’s a rare thing to meet someone who has it all figured out—a person whose ambitions never outreach their means and who can find nirvana within a reasonable drive from their home. But for nearly 40 years, Milwaukeeans could find such a person with perhaps more ease than the residents of any other city in the nation. From the 1960s through the 1990s, one needed only to visit Bradford Beach during the morning hours, be it the peak of the summer swelter or the depths of the winter chill, to find a man at an enviable peace. This was the domain of Dick Bacon, a Milwaukee brewery worker with no hopes or dreams much beyond playing volleyball, lounging on the beach (in any weather) and building his tan.
Bacon died 15 years ago this summer, depriving Milwaukee of one of its most colorful (usually somewhere between a light mahogany and a glimmering bronze) characters. But Bacon himself was hardly cheated in life. Despite his modest means, he lived nearly every day on his own terms—save for the occasional arrest for nude sunbathing—and bred a legacy that still survives long after his last morning spent on the beach.
If anyone was born to gain fame as a nude male sunbather, it was Richard “Dick” Bacon. While the numerous newspaper articles on Bacon neglect to give details about his upbringing, he was a known figure at Milwaukee’s Bradford Beach by the early 1960s, when he began a streak of daily tanning sessions at the crest of Lake Michigan that would last until his death in August 2000. “I’ve only had one ambition in life: To enjoy it to the fullest and never have to work any more than I have to support myself,” Bacon told the Milwaukee Sentinel in 1978. “From the time I was a kid, the only thing I planned for was retirement.”
When he worked, he labored at the Pabst Brewery, sticking to the second and third shifts, so he could reserve his mornings for the beach. He liked to recount an incident from his youth—when he fell asleep on a West Coast beach and awoke to a seal sleeping beside him—that cinched his love for sand. Sometime in the 1960s, he met a girl at Bradford whom he would eventually marry. When she asked him his name, he replied, “Bacon. Wanna strip?” They stayed together for about nine years before she realized his deepest love would always be for the beach.
Read more: https://shepherdexpress.com/arts-and-entertainment/ae-feature/dick-bacon-abides/
Posted by Clint Teeters at 8:59 AM