'It's irresponsible and it's dangerous': Experts rip Trump's idea of injecting disinfectant to treat COVID-19

"It’s a common method that people utilize when they want to kill themselves," one doctor said. Here are the facts about poisonous chemicals.


April 23, 2020, 7:47 PM CDT / Updated April 24, 2020, 6:32 AM CDT
By Jane C. Timm
President Donald Trump on Thursday suggested exploring disinfectants as a possible treatment for coronavirus infections — an extremely dangerous proposition that medical experts warn could kill people.
After a Homeland Security official mentioned the ability of disinfectants like bleach to kill the coronavirus on surfaces, Trump remarked on the effectiveness.
"And then I see the disinfectant where it knocks it out in a minute. One minute. And is there a way we can do something like that, by injection inside or almost a cleaning?" Trump said during his daily briefing at the White House. "Because, you see, it gets on the lungs, and it does a tremendous number on the lungs. So it'd be interesting to check that. So that you're going to have to use medical doctors, but it sounds — it sounds interesting to me."
Disinfectants like bleach are poisonous and dangerous when mishandled, doctors say. The maker of Lysol also issued a statement warning against any internal use of the cleaning product after Trump's comments.
"This notion of injecting or ingesting any type of cleansing product into the body is irresponsible, and it's dangerous," said Dr. Vin Gupta, a pulmonologist and global health policy expert who is an NBC News and MSNBC contributor. "It's a common method that people utilize when they want to kill themselves."
Trump's Food and Drug Administration specifically warned against drinking the chemicals in disinfectants ­— a fake science that has been peddled as a cure for autism and HIV infection for decades — noting that consumption of such products "can cause nausea, vomiting, diarrhea, and symptoms of severe dehydration."
"Any amount of bleach or isopropyl alcohol or any kind of common household cleaner is inappropriate for ingestion even in small amounts. Small amounts are deadly," Gupta said.
Online, others doctors reacted with horror.

As a physician, I can’t recommend injecting disinfectant into the lungs or using UV radiation inside the body to treat COVID-19. Don’t take medical advice from Trump. https://twitter.com/atrupar/status/1253448500676898818 …

Aaron Rupar
✔@atrupar
Replying to @atrupar
"The disinfectant, where it knocks it out in a minute, and is there a way we can do something like that by injection inside, or almost a cleaning. It gets in the lungs" -- Trump seems to suggests that injecting disinfectant inside people could be a treatment for the coronavirus 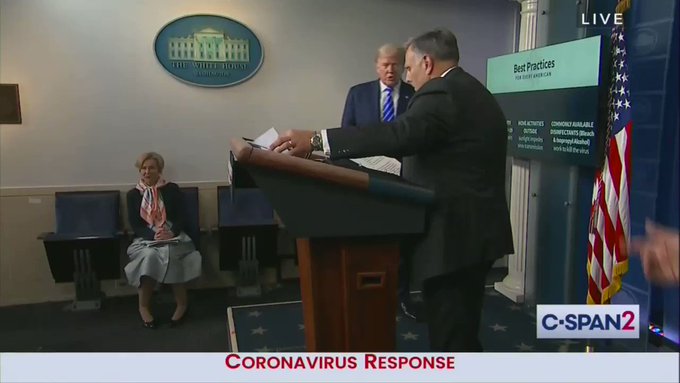 236 people are talking about this
Gupta added that it was "demoralizing" for a doctor to hear the White House "peddle improper health messaging" and said the president had a pattern of pushing unproven medical treatments.
The president spent weeks advocating to use the antimalarial drug hydroxychloroquine after anecdotal evidence suggested that it might help patients fight COVID-19, the disease associated with the coronavirus. On Tuesday, a study of coronavirus patients in a Veterans Affairs hospital reported more deaths among those treated with hydroxychloroquine than among those treated with standard care.
"It's exceptionally dangerous," Gupta said. "There's people who hang on to every word of the president."
The claim came after a long exchange in which Trump also suggested that light and heat — which also can destroy the coronavirus on a surface — be used to cure the disease.
"Maybe you can. Maybe you can't. I'm not a doctor. I'm, like, a person who has a good you-know-what," Trump said, pointing to his head.
Dr. Deborah Birx, the White House coronavirus response coordinator, said she had not seen heat and light used as "a treatment."
Joe Biden, the apparent Democratic presidential nominee, criticized Trump for the suggestions on Twitter.

29.1K people are talking about this
"Here's an idea, Mr. President: more tests. Now. And protective equipment for actual medical professionals," he said.