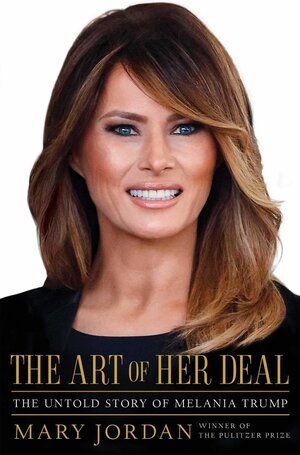 The Art of Her Deal: The Untold Story of Melania Trump, by Mary Jordan
Simon & Schuster
From the outside, Melania Trump looks like a woman in over her tastefully balayaged head. At public events, she rarely speaks, but assumes the rictus smolder — like a model who has just spotted a lion over the photographer's shoulder — that inspired a thousand #freemelania signs.
A new, scrupulously reported biography by Washington Post reporter Mary Jordan counters this perception, arguing that the first lady is not a pawn but a player, an accessory in the second as much as the first sense, and a woman able to get what she wants from one of the most powerful and transparently vain men in the world. The book is called The Art of Her Deal.
For this book, Jordan interviewed more than a hundred people, including Melania's Slovenian childhood acquaintances, staff members at Donald Trump's properties, players in the New York and Paris modeling world, and one-time Trump insiders like Chris Christie, Roger Stone, and Anthony Scaramucci. She also spoke briefly to the first lady herself in the course of her reporting on the 2016 election. The result is a convincing case that those "who dismiss her as nothing more than an accessory do not understand her or her influence."
Read more: https://www.npr.org/2020/06/14/876640546/the-art-of-her-deal-aims-to-show-melania-trump-as-an-influential-collaborator
Posted by OrbsCorbs at 9:46 AM