Kenosha County District Attorney Michael Graveley says an 'extensive investigation' into Lee Hagopian's optical business was delayed for much of 2020 because of the Covid-19 pandemic, social unrest, and more.

"I accept that response," said Jill Gillmore, who accuses Hagopian of performing an illegal eye exam on her and sending her home with expired contact lenses and no instructions on how to put them in, a combination of factors that she says resulted in an injury to her eye. 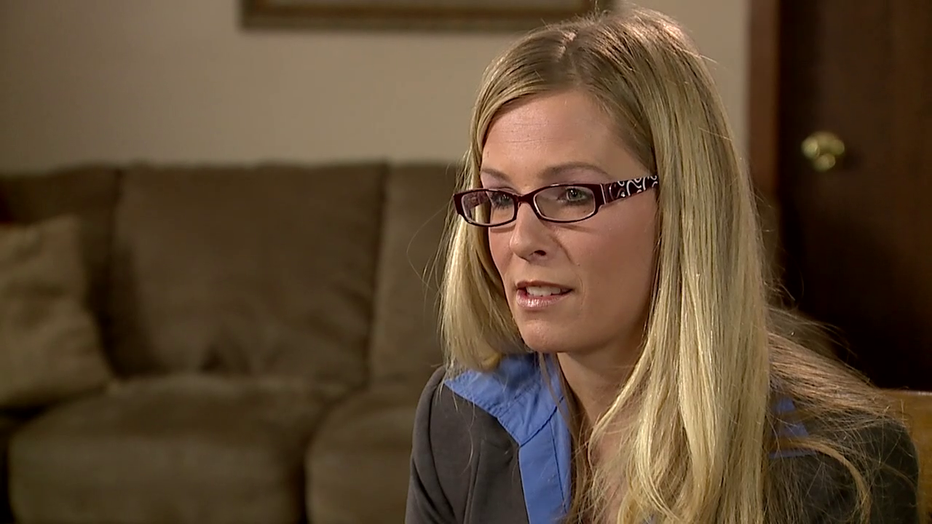 In the fall of 2019, Gillmore says Lee Hagopian performed an illegal eye exam, sent her home with expired contacts and coached her to treat an eye injury -- all without a license.

"If anybody can pretend to be an eye doctor, a lot of people will be deceived and possibly injured," Gillmore said.

The mother of seven filed complaints with state regulators, her state representative and the Kenosha Sheriffs Office in 2019. It wasn't until April 19th, 2021, that Hagopian was charged with practicing optometry without a license, misdemeanor theft, and obstructing an officer.

In the fall of 2019, Gillmore went to Next Day Glasses in Paddock Lake, where she says Hagopian advertised "eye exams." She says he invited her into a small room within the store, examined her eyes on an optical machine, told her she needed a ‘stronger prescription,' then sent her home with a pair of trial contact lenses.

It wasn't until that night she discovered the trial contacts had been expired for eight years.

"My eyes were completely on fire," she recalls. "It was a very traumatic experience." 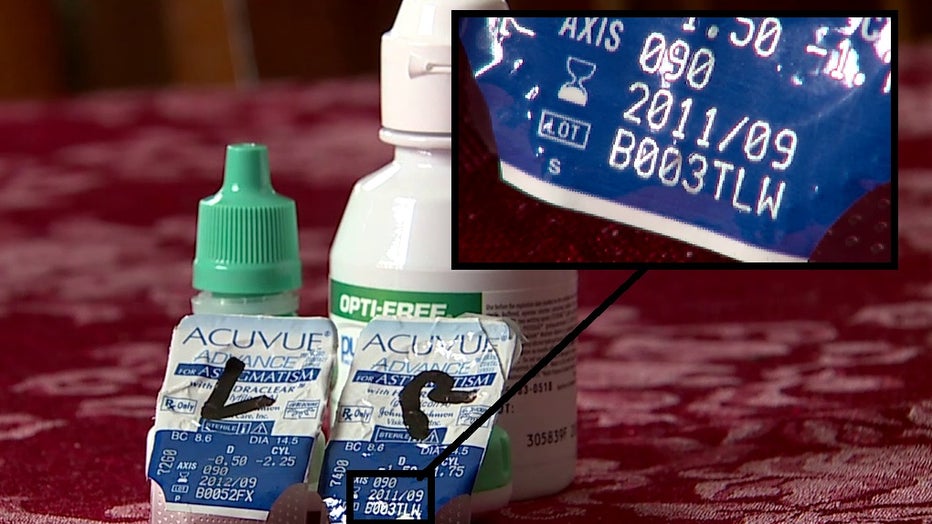 Gillmore says the contacts Hagopian sent her home with had been expired for eight years.

She would soon discover Hagopian is not an eye doctor at all. And it wasn't the first time he'd been accused of posing as one.

"I don’t want somebody to go to a ‘doctor’ and he’s not a doctor," said Shannon Hahn, a former Hagopian customer who spoke to FOX6 News in 2015.

"I'd like to talk to you about practicing without a license," said Bryan Polcyn, back in 2015, as he attempted to talk to Hagopian about the allegations.

"Please leave," Hagopian responded, ushering FOX6 News out of his store, Eye Xams, which used to be located in a Kenosha shopping center.Our 2015 investigation not only found numerous customers who said Hagopian performed illegal eye exams on them, but a licensed optometrist who accused Hagopian of stealing his identity to submit insurance claims.

That same year, 2015, the Wisconsin Department of Safety and Professional Services issued an injunction, ordering Hagopian to stop practicing optometry without a license. Four years later, Gillmore came to FOX6 News to say, he was at it again.

Once again, FOX6 News tried to talk to Hagopian. "Speak with my lawyers!" is what he said when we showed up at his Paddock Lake store, moments before he called police on FOX6 News.

Police dispatcher: "What threat did they make?"

Hagopian: "A verbal threat to…"

Police dispatcher: "To do what?"

Hagopian: "To put me on FOX6 News and make me look bad." 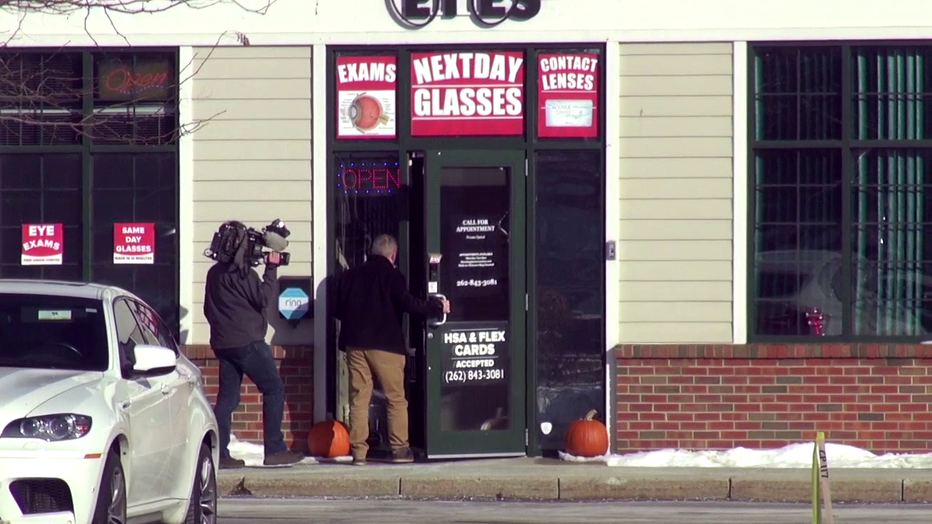 When FOX6 Investigators attempted to speak to Hagopian in 2019, he called the Kenosha County Sheriffs Office to complain.

"It's absolutely scary," said Peter Theo, President of the Wisconsin Optometric Association. "There is nothing routine about an eye exam because of the eye health part of it."

Theo says there's a big difference between an optometrist - who can diagnose eye conditions and write prescriptions - and an optician, like Hagopian.

"The optician is there to dispense eyewear," he said.

But time and time again, complaints about Hagopian have been met with the same response – it's a civil matter. Until now.

"This was filed on the 19th (of April) and I've had barely any time to understand it," Hagopian said as he held a copy of the criminal complaint at his first appearance in court. "That is why I would ask the state and the court to grant a continuance."

Instead, Court Commissioner Loren Keating instructed her clerk to read the entire, 6-page complaint out loud. That includes the part where a detective asks why his business cards say "under new ownership."

"That, I'll admit, is a fib," the clerk read aloud. It's a lie detectives say Hagopian admits telling "in case FOX6 News returns to his business," the clerk said.

"You just wouldn’t let up on it," Theo said. "So, makes sense that he was worried about it."

"It's sad," Gillmore reflects. "How do you come to that point in your life where it’s just one scheme after another scheme?"

Then again, former customers aren't the only ones getting fed up with Hagopian's behavior. Last month, he tested the patience of the Court Commissioner presiding over his criminal case. 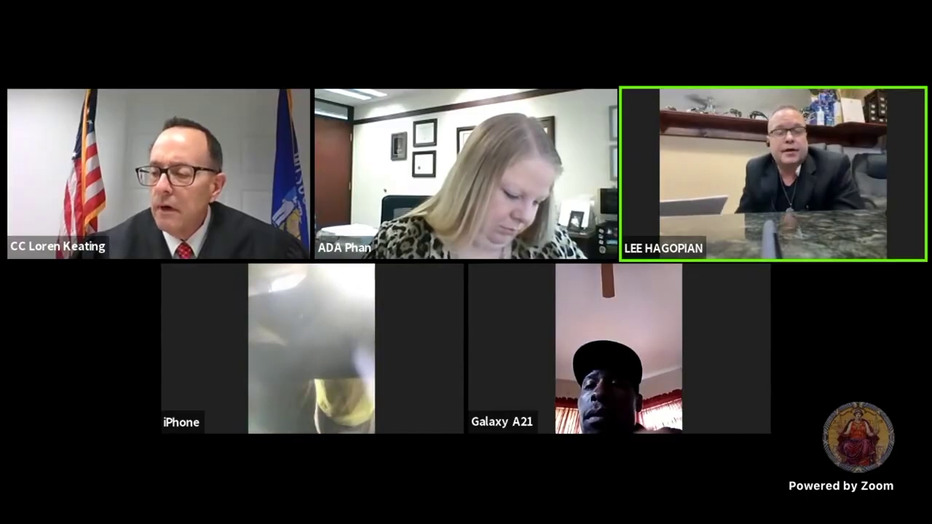 At his initial court appearance on three criminal charges, Hagopian repeatedly asked for "more time" so he could "understand" the charges. The court commissioner refused to grant a continuance, at one point scolding Hagopian, "Don't argue with me."

"I do not understand," Hagopian said of the complaint, even after it was read aloud for the entire courtroom to hear.

"You understand plain English," Keating said. "You and I are talking. (The complaint) was read to you. We’re moving this case forward."

"I need time to…" Hagopian interrupted.

"No, you do not!" Keating shot back. "Not at this point. You may need time to get an attorney, but I am moving this case forward, so don’t argue with me."

After all this time, Gillmore says she's forgiven Hagopian for the pain he put her through."I’ve moved on," she said.

She just doesn't want it to happen to someone else. Especially, she says,  when it all could have been so easily avoided.

This may be the first time someone has been criminally charged in Wisconsin for posing as an eye doctor.

A spokesperson for the Department of Safety and Professional Services (DSPS) said she could not find another case like it.

Meanwhile, Hagopian did not return FOX6's phone calls seeking comment on the charges. His next court date is May 28, 2021, for a pre-trial conference.

Posted by OrbsCorbs at 4:58 AM