RACINE, Wis. - Community members gathered on Wednesday, Sept. 8 – in memory of a Racine teen who was shot and killed last week.

Just two days before his homicide, Jayden Cronin started his senior year of high school at Turning Point Academy. On Friday, Sept. 3, he was walking home from an area football game when his life was abruptly taken.

In the very spot where Cronin was shot, loved ones – and even strangers – stood together in prayer Wednesday.

"We need to stop the violence," said Tamerin Hayward, co-president of the Racine Interfaith Coalition (RIC).

"Jayden was walking home from a Horlick (High School) ball game. He lives right in this neighborhood. He was on his way home and someone killed him," Hayward said. 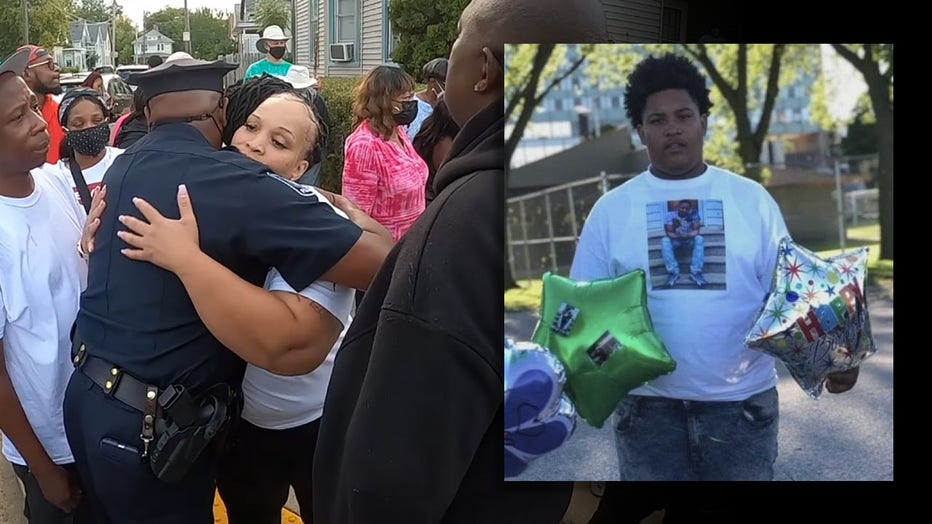 Officers responded to reports of shots fired when they found Cronin on the sidewalk, with a gunshot wound. He was taken to the hospital but died from his injuries.

"Until we find out who, we won’t know why," said Hayward.

Cronin's mother, Monika, was too broken up to speak on camera Wednesday and asked for prayers. She said her son was a "sweetheart and was loved by everyone" and "will truly be missed." He enjoyed spending time with family and friends, loved cooking, shopping and taking vacations.

"This is a life wasted. Everything he ever had the potential to be stopped on that day," said Racine Police Chief Maurice Robinson.

The vigil, organized by the Racine Interfaith Coalition, drew dozens of community members, faith leaders and the Racine police chief to mourn the young life lost – and to call for an end to gun violence.

"The parents, the teachers, the friends, the uncles, the cousins, the fathers have to be involved and help these people – the young people – understand there’s more than what you see right now," said Robinson. "You’ve got to think beyond today’s anger but look for tomorrow’s future."

Racine police have not disclosed whether any suspects have been identified or arrested.

Anyone with information about the homicide is asked to contact the Racine Police Department Investigations Unit at (262) 635-7756.

Posted by OrbsCorbs at 3:38 AM