A Bad Place To Take a Prom Picture

Seemed like a good idea at the time...standing on the dock, over the water. Great place to capture the moment.

But you need to be sure to check the weight limit.

Don't worry, they dried themselves off and went to prom!
Posted by hale-bopp at 10:57 PM 4 comments:

Happy Mother's Day on Sunday.
Posted by The Sheriff at 12:00 AM 9 comments: 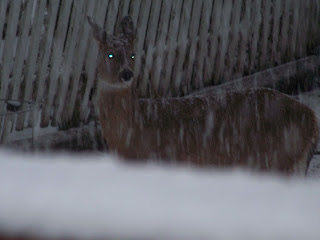 I just want to wish all the mom's a very Happy Mother's Day.

Yes I do know this is early but I am not going to be by a computer this weekend. I am going up north to see my older daughter graduate college. That is why I am posting this very early this week. We are leaving today to go up north. I am writing this in between all my packing.

Saturday my son is having a cookout for Mother's Day and I get to see my granddaughter. I can't wait for that one.

I am sorry I haven't posted anymore flower or tree pictures. I will be getting more pictures from up north. Then I will post more pictures on here.

I hope everyone has a great weekend!♥
Posted by Tender Heart Bear at 1:59 PM 6 comments:

Arnold is snorting pansies again.
Posted by The Sheriff at 12:00 AM 12 comments: 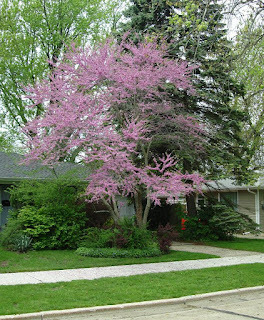 I don't want to step on Tender Heart Bear's toes, but I have to post a picture of my favorite spring flowering tree.  This Redbud is on Erie Street.

If you're going to plant Redbud, the advice usually given is be sure to use local stock as Rebuds from elsewhere may not be cold hardy for our winters.
Posted by OrbsCorbs at 7:18 PM 4 comments:

Hello, my May flowers! How are you? Spring is still bursting out all over out there. I think the flowering trees in the city are trying to impress us with their beauty. I’m impressed. I’m almost stupefied. Everywhere you look is a glorious display of form and color. The shrubs, the flowers, even the grass, are vibrant. Hail to thee, o joyous spring!

Did any of you go to the Kiwanis Pancake Day last Saturday? Junior and I went with Mr. Zanza. My, Junior can pack away the pancakes. My, o my! Junior is at that sensitive age where he is aware of the opposite sex, but he has no idea of what to do with them. I pointed out that all those pancakes might affect his waistline, thus making him less attractive to girls. That was a mistake. I really hurt him. To compensate for the emotional pain, he ate even more. The poor dear. Well, we certainly got our money’s worth. I wonder if they’ll let us back in next year.

I do not want to start an argument here, but I feel I must say that I endorse the Positively Racine campaign. Like Ms. WhyNot, I can see good arising from it. Our city needs a better self-image. Once people are of a positive mindset, it becomes contagious. That’s what we need to move forward. Of course, Mr. OrbsCorbs and others have a right to disagree. In fact, they positively do.

Of course, the state recall primary was yesterday. I am so frustrated that our political system has become an either/or operation. There is no middle ground, there are no moderate candidates, there is no compromise. Either you are this or you are that. There is no third option other than the useless write-in. The ideological gridlock is complete, cemented in place with hatred and fear. It’s a shame that for being so technologically connected, we are personally disconnected by politics. I have an opinion of politicians, but I will not sully my own blog with it.

Bless you, too, my dear readers. Thank you for stopping by to try my “wares.” I am flattered by your attention. I love you all.

I hope you are enjoying the spring. Don’t forget to say a positive thing or two about our town. “You catch more flies with honey.” Stay sweet, my dears. Here’s a new word site: http://home.comcast.net/~wwftd/Frame1.html Schizothemia!
Posted by Anonymous at 2:00 AM 9 comments:


There is an interest article in the JT today. Click here for JT Article

Talk about a “slush fund”, the City of Racine has funds from last year still sitting in an account. My question is, “why aren’t those dollars moved automatically into a 2012 account”?

I believe this is another reason our taxes are high because of miss use of funds and hiding them for, ‘Oh what should I call them’, special projects.

That reminds me of the owl and the cat video that Orbs posted a few days ago.
Posted by The Sheriff at 12:00 AM 10 comments:

"Every Breath You Take" Revisited

Here it is, as I promised, another installment of wildlife photos. Instead of waterfowl, I'm bringing this one closer to home and into the backyards. Blackbirds are quite common everywhere, yet little is seemingly known in the difference between the species. Here are some of them found in the Racine area... 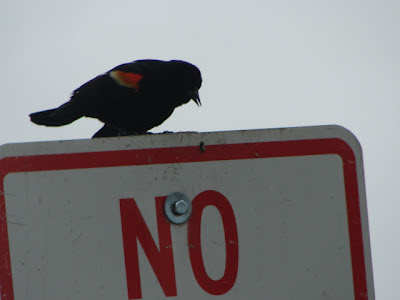 Above is a male Red-winged Blackbird. Picture taken at Pritchard Park. Red-wings are often found anywhere there is tall grasses and marches, especially among the cattails were they thrive. While the females tend to be a dusky brown in color, the males have red plumage on their wings. Red-wings are omnivorous, feeding mostly on seeds and wheat grains, however they'll snack on insects. 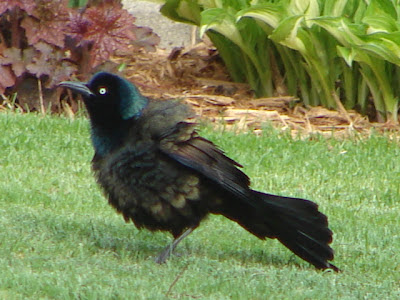 Above is the Common Grackle. Picture taken on a front lawn on Charles Street. These icterids can be easily found on lawns and open fields, often in flocks. This robin sized bird can be identified by a long tail and feathers that are appear black with purple, green or blue indescence on their heads. They'll eat most anything-often seen on the ground foraging for bugs, especially after a lawn trimming. 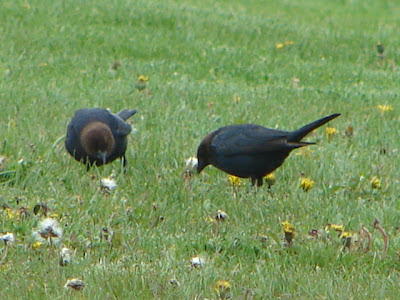 Above is the Brown-headed Cowbird. Picture taken at Roosevelt Park. Found where ever there are open fields and lawns, often foraging with Starlings and Grackles. Cowbirds are brood parasites, meaning they'll lay eggs in other bird's nests. The young Cowbirds are taken care of by the host parents in expense of their own young. 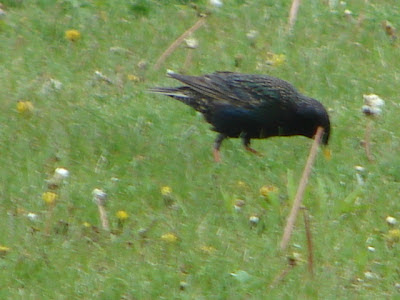 Above is the European Starling. Picture taken at Roosevelt Park. Commonly found on lawns and parks everywhere. Identified by the metallic sheen plumage and white spots. Often they are found foraging for insects among other blackbirds. This invasive species was introduced to the Americas by the English settlers in the late 1800's. Since then, they have adapted and multiplied to a point where they have become a nuisance.

All pictures here were taken by Tender Heart and me using either a Sony DSC-H2 Cyber-shot or a Sony DSC-W350 Cyber-shot. Wildlife photography is not easy. Animals don't pose for pictures, nor even stay still. Most often, they are gone before the camera is ever focused. For every good shot, a few are missed completely.

Here is a partial list of complete misses for last week...

A Red Fox with cub. (You know about that already)
A Green Heron at Trout Ponds (I finally got him this afternoon)
A Baltimore Oriole at Trout Ponds
A couple of Eastern Chipmonks at Sanders Park.

Never fear, I've a few dozen pictures ready to be posted and more coming as I head out there with armed with a camera. Some pics will SURPRISE you....
Posted by drewzepmeister at 9:29 PM 7 comments: 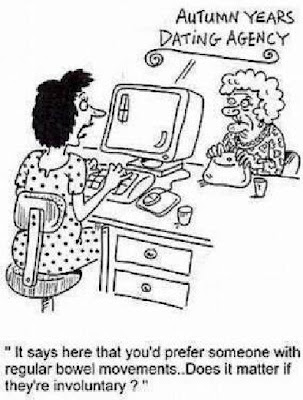 Let's call this a "pre-blog"

I'm reading a book that has really made me think.
It's about introverts and extroverts.
I have always thought of myself as one in particular, and now am not so sure.
Before I post what I got from this book so far, I thought it would be fun to guess what each other are, then I will follow in a day or so with an excerpt from the book and 'out' myself.
Happy guessing, this should be fun. Please don't give up what you think you are until the next installment - GO!
Posted by lizardmom at 4:45 PM 12 comments:

Email ThisBlogThis!Share to TwitterShare to FacebookShare to Pinterest
Posted by lizardmom at 4:38 PM No comments:

Just a little something.....