"McClelland tossed seven touchdown passes, all in the first half, to join Brandon Benda of the now defunct McHenry County Pirates in the MSFL record book. Benda set the record in 2009.

"The Raiders led 70-0 at the half. McClelland threw two touchdown passes each to Sam D'Alie and Dorian Palmer. Traves Worthington, Dom Kegel and John Sterba each had one touchdown reception.

"J.R. Taylor, who saw limited action in the blowout, rushed for a touchdown in the first half. he finished with six carried for 28 yards. Rookie Ivry Lashley led all Raiders with 43 yards on the ground on just four carries. He had a 17-yard touchdown run late in the first half.

"The only other score for the Raiders came on a 60-yard interception return by Nate Heard late in the first quarter.

"The Venom had negative total yards until Torrick Wright broke off a long run on their last drive of the game. The Venom got within one inch of scoring their first points in a game they lost this season but the Raiders defense stopped them to secure the shutout. The Venom have now been shutout five times this season.

"The Raiders improve to 6-0 on the season and 4-0 in the MSFL with the win and extend their winning streak to 20 games. Racine ends a month-long road trip next week in Madison, Wis., against the Monona Warriors (3-3, 1-3 MSFL).

"The Racine Raiders, a 501c(3) not-for-profit organization, begin their 61st season of operations in 2013. The Raiders won their eighth national championship in 2012. Find out more about the Racine Raiders at http://www.racineraiders.com."
Posted by The Sheriff at 10:44 PM 1 comment: 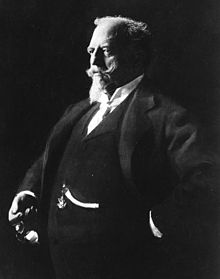 The instant replay meets The Matrix. Will they be reviewing every play now?
Posted by OrbsCorbs at 7:21 PM 3 comments:

They dance better than I do.
Posted by OrbsCorbs at 6:22 PM 3 comments:

Hello everyone! Another episode of Four for Fridays is here! Cool! It has been a rather bland week for me despite the pleasant weather. Anyways, some questions for you...

1) What is the most expensive restaurant you have dined at?

2) What restaurant do you dine at frequently?

3) What is your favorite ride at a fair/carnival?

4) What is your lucky number?

Enjoy your weekend!
Posted by drewzepmeister at 5:08 AM 15 comments:

I know I have not posted any wildflowers in awhile I am sorry for that. I thought tonight I would post a few for everyone to enjoy. 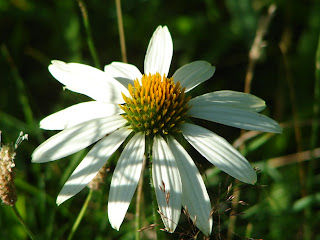 This is a White Coneflower the picture was taken at Chiwaukee Prairie Reserve in Pleasant Prairie Wi. 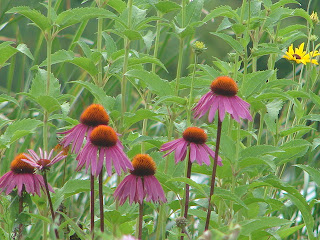 This is a Purple Coneflower this picture was taken at Prichard Park in Racine Wi. 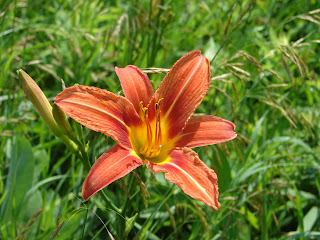 This is a Common Daylily this picture was taken in Bancroft Wi. 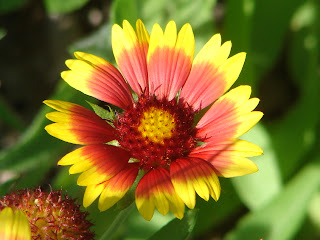 This is a Indian Blanket this picture was taken at Chiwaukee Prairie Reserve in Pleasant Prairie Wi. 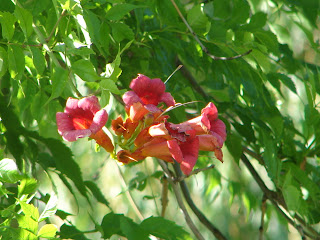 This is a Trumpet Creeper this was taken on 3 Mile Rd in Racine Wi.

I picked these flowers because I thought they are some of my prettier flowers. I really enjoy going out and taking the pictures and I really hope everyone enjoys them. More to come soon!

Email ThisBlogThis!Share to TwitterShare to FacebookShare to Pinterest
Labels: Flowers
Posted by Tender Heart Bear at 7:34 PM No comments:

"Sittin' On The Dock Of The Bay | Playing For Change"

I still think that Otis Redding did it best.
Posted by OrbsCorbs at 7:09 PM 4 comments:

Be more dog: sniff the crotches of people you meet and slobber all over them.
Posted by OrbsCorbs at 8:17 PM 4 comments:

"How To Please a Woman Using Bass"

So that's why boom cars are so popular.
Posted by OrbsCorbs at 2:14 AM 8 comments:

Hello, my cool cucumbers!  How are you?  Are you “chillin’”?  Or are you chilly?  The other day, I was outside in the yard on a cool afternoon.  A wind blew and I suddenly thought of autumn.  It’s still July, but it’s beginning to feel like fall.  Tomorrow is the first day of August.  Maybe it will heat back up again.

Like others, I enjoy the cool evenings and nights we’ve recently experienced.  When that summer heat beats down all day, the nights stay pretty warm (and humid), too.  I sleep, and do everything else, more comfortably when it’s cool.  I do know people, though, who prefer the heat.  Not me.  I wilt in the heat.  I need air conditioning or an astral projection to Iceland.  How did I get so spoiled?  When did the luxuries become necessities?  Or do I have a right to expect an easier life as I get older?

I was taken aback by the news that Dino’s Restaurant is closing.  What a shame.  I don’t suppose that Mr. Mayor, a “professional real estate agent,” can do anything to help.  Mr. Mayor gives our money to his friends and contacts.  There’s nothing left to help out a locally owned restaurant that’s been in existence for more than half a century.  Oh my.  The parade of shame just keeps marching through City Hall.  Millions for millionaires, but not a dime for working people.

The blackout of WTMJ 4 from the local cable provider is sad.  The broadcast of a Packer preseason game may be affected.  That is unacceptable.  The Journal Broadcast Group and Time Warner Cable are both filthy rich.  They are like squabbling, spoiled brats.  As always, the real winners are the lawyers involved in the negotiations.  No matter what happens, they get paid handsomely.

I’d like to formally complain about Racine drivers.  That’s right, I, Ms. Demo Derby, would like to lodge a complaint with the appropriate authorities.  I have never seen worse driving.  Some drivers are uninsured and/or unlicensed.  Some are drunk.  Some are blind.  Some don’t care.  Too many don’t know the rules of the road.  Driving in Racine is now an ordeal for law-abiding citizens.

I like the idea of swapping Ethics Boards with Kenosha.  Is there any way we can swap out Mr. Mayor, too?  We don’t need a mayor in return.  We have an administrator to perform that job.  I suspect that we’ll accept just about anything in trade for Mr. Mayor.  How about some streetlights?  Spare change?  Want us to pay you?  How much?  He’s not worth a lot.

Where did our ethics go?  madamezoltar@jtirregulars.com

Bundle up, my dears.  I didn’t think I’d be saying that for at least a few months.  Perhaps another glacial age is upon us.  Get out there and enjoy it before it becomes a winter wasteland.  Ydromancy!
Posted by Anonymous at 2:00 AM 4 comments:

Happy Wednesday to you.
Posted by The Sheriff at 12:00 AM 19 comments:

"JOURNAL TIMES TURNS ITS BACK ON MINORITIES"

"In its July 30 editorial, the Journal Times newspaper made clear that it is indifferent to the needs and wishes of minorities when it called for stopping the recall effort against 4th District Alderman James Kaplan.

"While the 4thDistrict residents (67% of whom are minorities) have raised a clear voice that they no longer wish to have Kaplan as their alderman, the Journal recommends that they cancel the recall and wait. To the citizens, this feels like a 'counselor' telling an abused wife to give her abuser another chance, or to wait til the children finish school.

"Kaplan has been worse than indifferent to the needs of 4th district residents, he has been outright hostile. He has actively worked to prevent minority businesses from opening, has advocated for street lights being shut off in unsafe neighborhoods and has abused his position for personal advantage in petty and spiteful ways.

"The editorial cites the cost of an election as a sound reason for cancelling the recall, but their words are hollow. When hundreds of thousands of dollars were spent on remodeling city hall and aldermen like Kaplan voted to cover $100,000 of personal liabilities for the mayor or over one MILLION dollars was given to an engine plant that has produced no jobs and no engines, the Journal Times has stood silent. But try to recall an alderman who has been a disservice to his constituents and they’re suddenly concerned about spending.

"The recall has been called for by hundreds of district residents and it has been certified by the city clerk. At this point, only the city clerk can declare the recall effort unqualified, but only if Kaplan’s undocumented claim against one of the petition circulators is accepted. It would be an unprecedented decision and would certainly result in a review by the Government Accountability Board."

How do you make a handkerchief dance?  Put a little boogie in it!
Posted by SER at 3:43 AM 5 comments:

"Dino's Closing After 60 Years in Racine"

"After nearly 60 years of serving Racine, Dino's Restaurant will close its doors at the close of business on Sunday.

"Dino Dominici opened the restaurant at the corner of 16th Street and Phillips Avenue in 1955. Now 82, he said it feels terrible to see his life's work closing.

"'I've been here for 58 years, paying the bills and now the bank doesn't want to work with us,' he said. 'We're doing good business and we have good customers.'

"Dominici said the trouble began over two years ago when he had to have open heart surgery and couldn't keep up with the payments. When he was on the mend, the family tried to get the bank - Tri-City National Bank - to work with them, but the family couldn't meet the cash requirement.

"Dave Ferderer, Dominici's grandson, told Patch Monday that the business is going through foreclosure despite an agreement that the bank would own the building and the restaurant would lease. Then, he said, he got a call from the family's lawyer saying the deal was a bust and foreclosure proceedings would commence.

"'We started going through this two years ago, trying to get them to work with us, but they just wouldn't,' he said. 'For some reason, they'd rather see an empty building than give a local business another chance.'"


I've dined there only a couple of times.  The food was good.  It's disappointing to see another locally owned business go belly up.

Edit: Racine Uncovered has a "Letter from Dino’s Restaurant to the community" posted: http://racineuncovered.org/2013/07/letter-from-dinos-restaurant-to-the-community/
Posted by OrbsCorbs at 1:23 AM 9 comments:

Butterfly kisses and chimpanzees make Tuesday a great day for me.
Posted by The Sheriff at 12:00 AM 10 comments:

This video is long but it is well worth watching. I never knew this until today and have to thank Mary for sending it to me.

Wow, some guys last for three minutes.
Posted by OrbsCorbs at 10:07 PM 4 comments: 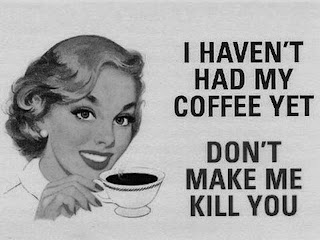 A lot of us feel that way on Monday morning.
Posted by The Sheriff at 12:00 AM 9 comments:

"But peer-reviewed academic studies also have linked psychopathic tendencies with the charming, manipulative, grandiose, risky and seemingly guiltless behavior of many leaders, such as politicians, chief executive officers and other telegenic public figures."


"...charming, manipulative, grandiose, risky and seemingly guiltless behavior..."  Is there anyone in City Hall like that?
Posted by OrbsCorbs at 9:14 PM 5 comments:

The video is from Racine Community Media.

The lies are from lying John. Party on, lying John!
Posted by OrbsCorbs at 4:44 PM 7 comments: