Jason Eggars' life shouldn't have ended like this.
Shot to death in a dirty alley, surrounded by garbage and discarded mattresses.
He was 15 years old — a freshman at North Division High School.
And his three little brothers — Nivaire, 13, Jivyon, 10, and baby Shawn — shouldn't have to mourn Jason's untimely death.
"I can't live without him," Jivyon wailed at a vigil Saturday to remember Jason as his grandmother held him tightly.
Jason's family identified him as one of two teens who died in shootings Friday in Milwaukee. He was shot to death about 6:30 a.m. in the 2600 block of North 17th Street. The circumstances were under investigation.
Then, about a mile and a half away, a 17-year-old boy died in a shooting about 8 p.m. in the 3200 block of North 5th Street. Police arrived to find the teen had died. They had not yet identified him Saturday evening.
Available details about both shootings were limited. Police asked anyone with information to call (414) 935-7360 or Milwaukee Crime Stoppers at (414) 224-TIPS. 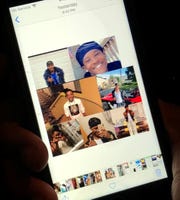 Buy Photo
A family member holds up a collage of photos of Jason Eggars, 15, at a vigil in his honor Saturday night in Milwaukee. Jason died Friday morning in a shooting at North 17th and West Center streets. (Photo: Sophie Carson/ Milwaukee Journal Sentinel)
A crowd gathered Saturday evening outside Jason's family home at North 23rd and West Center Streets to decry the violence that took Jason from their lives.
"Fix it! Fix it!" shouted Lisa Collins, Jason's aunt.
"It's just going on and on and on and on. And it never stops," Collins said. "We're losing too many people."

Police did not initially release the age of the person killed Friday morning, calling him only a "male victim."
Read more: https://www.jsonline.com/story/news/local/2019/12/14/milwaukee-homicides-two-teens-15-and-17-die-shootings-friday/2651336001/
Posted by OrbsCorbs at 11:33 AM