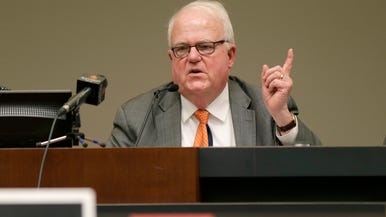 MADISON - U.S. Rep. Jim Sensenbrenner wants to make it easier to identify police officers prone to brutality by creating a national registry of "bad cops" — siding with Democrats at a time of deep division over how to move forward from the suffocation death of George Floyd by a white police officer.
Sensenbrenner, a Republican who represents a deeply conservative district in southeast Wisconsin, told Floyd's brother, Philonise Floyd, during a Wednesday meeting of the House Judiciary Committee that the officer who killed his brother shouldn't have been on the Minneapolis force.
"I have heard George Floyd's assailant had 16 allegations of misconduct against him. Why was he still on the force?" Sensenbrenner said. "That was just an invitation for more misconduct. And unfortunately, Mr. Floyd, your brother ended up being the victim of that."
At least 17 complaints in 19 years were filed against Derek Chauvin, the Minneapolis police officer who knelt on George Floyd's neck for nearly nine minutes as Floyd said he couldn't breathe and pleaded for his mother. At the time of Floyd's death, Chauvin worked as a training officer for new recruits.
Sensenbrenner, who is retiring this year after more than four decades in Congress, mostly took aim at police unions, however, blaming them for what he described as a slow and typically ineffective process to discipline or rid police departments of officers who are likely to harm more than help the public.