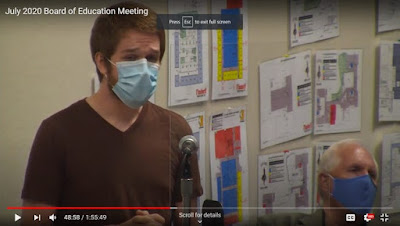 The Waukesha School Board and Waukesha School District are investigating which school board member swore at a resident following a public comment session of the board's July 8 meeting.
Ben Strong, a Waukesha resident, was speaking to the board about why he thought the district should end its school resource officer agreement with the Waukesha Police Department, as had several residents who spoke during the public comment period.
Such contracts and other public spending on police have come under intense scrutiny following the death of George Floyd and subsequent protests against racism and police brutality.
After Strong finished speaking and was walking away from the podium, the video's audio captured one of the board members referring to him as an "asshole." Soon after, a video clip of the incident circulated on social media. It's unclear which board member made the comment, but it was not Joseph Como, the school board's president, because Como was speaking to Strong as the comment was whispered.
It wasn't until after the meeting that Strong said he became aware of the incident.
"It's kind of funny because even before I saw the clip, I watched my speaking portion on the livestream and I still didn't hear it then because it was quiet. It wasn't until someone actually pointed it out to me that I was like 'oh wow, he called me an a-hole,' " said Strong.
Strong, who initially had not planned to attend the meeting, said the comment was representative of where the values and principles of the Waukesha School Board lie right now.
"They never really (approved the SRO contracts) with the consent of the parents or the students or the teachers or the people who actually have to deal with the SROs," Strong said. "They just went ahead and did it above their heads, and whenever someone like me, one of the community members, actually came in and wanted to talk about it, I got called an a-hole."
The district has a roughly $2.16 million contract with the police department to provide SROs. That's enough money to hire six full-time social workers, Strong said.
Waukesha School District Superintendent James Sebert said he and Como are aware of the comment and have been trying to determine who said it. Sebert said as a general practice, school board members do not publicly comment during that portion of the meeting.
"We are working with our Technology Department to see if we can ascertain where the comment originated," Sebert wrote in an email to Waukesha County Now. "As a District and as a Board, we value listening to our constituents."
"I'm a big proponent of free speech all around," Strong said. "So if he wants to call me an a-hole on the mic, recorded, in front of the entire community, it's really up to the community to decide — 'hey, should we keep this guy or should we not?' "
RELATED:7 hours and 1 'go to hell': Tempers flare at MPS meeting about $38.7 million budget hole
Contact Alec Johnson at (262) 875-9469 or alec.johnson@jrn.com. Follow him on Twitter at @AlecJohnson12.
From: https://www.jsonline.com/story/communities/waukesha/news/waukesha/2020/07/10/waukesha-school-board-member-swore-at-a-resident-during-public-meeting/5416188002/
Posted by OrbsCorbs at 7:32 AM