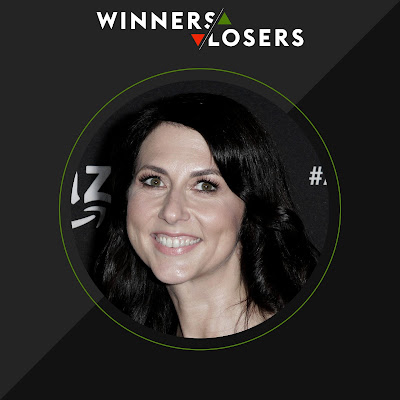 n a week when stock market indices were mostly flat, shares of online retailers soared. Amazon’s already astronomical stock shot up 10% between July 2 and July 9, giving its founder and CEO Jeff Bezos a net worth of $188.2 billion, a $16.2 billion bump for the week through Thursday. He remains the richest person on earth, widening his lead over Bill Gates at number two, who’s worth an estimated  $110.7 billion. His ex-wife, MacKenzie Bezos, is now the richest woman in America, with a $62.3 billion fortune.
An author and early employee at Amazon, MacKenzie Bezos walked away from her divorce with Jeff Bezos last July with 25% of his Amazon shares, then worth $36 billion. Since then, her fortune has nearly doubled as the pandemic has disrupted traditional retail. Amazon’s soaring stock price has pushed her fortune past that of Walmart heir Alice Walton, who was previously the richest woman in the U.S.
While she widened the lead between her and Alice this week to $6.1 billion, the Walton heiress and her brothers Jim and Rob, also got richer during an otherwise unimpressive week for the Dow and S&P. Each sibling’s fortune rose $3.1 billion over the week through Thursday, following a report by Recode  on Tuesday that Walmart plans to debut Walmart+, a cheaper alternative to Amazon Prime that will offer same-day delivery on groceries and other goods, later this month. The stock jumped nearly 7% on the news. A representative for Walmart did not respond to a request for comment about the new platform.
The only woman on the planet richer than MacKenzie Bezos is L'Oreal heir Francoise Bettencourt Meyers, who has a net worth of $64 billion. Bezos could soon beat her, too, as some analysts anticipate Amazon’s stock will continue to climb in the leadup to its quarterly earnings announcement on July 23.
The more MacKenzie Bezos gains, the more she is expected to ultimately donate. Shortly before her divorce was finalized, Bezos signed the Giving Pledge, joining Warren Buffett and Bill and Melinda Gates in committing to give away at least half of her net worth to philanthropic causes; her ex-husband has not yet signed the pledge. In mid-June, MacKenzie Bezos teamed up with Melinda Gates to host a competition for companies that promote gender equality, promising to make $30 million in grants to the organizations with the best ideas to help expand women’s power and influence in the U.S.
The week’s biggest gainer in percentage terms has nothing to do with ecommerce. Robin Zeng, the founder and chairman of Contemporary Amperex Technology, a Chinese company that manufactures batteries for electric vehicles, saw his net worth skyrocket 23.8% to $16.9 billion. The company is reportedly developing a “million mile” battery with Tesla that could revolutionize the electric car industry and make the vehicles much cheaper. Tesla CEO Elon Musk’s net worth has also continued to rise as shares of Tesla continued their meteoric climb. He’s $5.8 billion richer than a week ago.
Read more: https://www.forbes.com/sites/arielshapiro/2020/07/11/amazons-jeff-bezos-and-ex-wife-mackenzie-add-combined-22-billion-to-fortunes-in-one-week-walmart-walton/#75635e0930de
Posted by OrbsCorbs at 9:49 AM